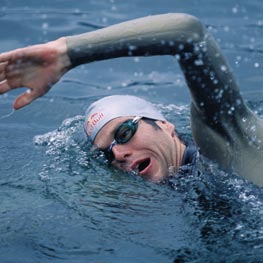 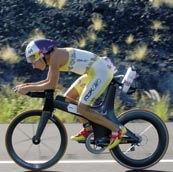 Tips from Toni Hasler,
Natascha Badmann’s
Red Bull is deﬁnitely more than just a party drink. The
original energy drink also has a lot to offer for athletes. What’s
in it, how does it work and how can it be used effectively
for sports? Toni Hasler, trainer and nutritional counsellor,
provides the answers.
There is no doubt for Toni Hasler: suppliers. Consequently, Red Bull can an athlete’s performance: the ultimate “Red Bull ﬁlls vital gaps in every be put to optimal use by the organism drop in the level of blood sugar results in athlete’s nutritional plan.” He should during athletic performances.
triathlete, Natascha Badmann, as RED BULL BEFORE, DURING
you have to refuel regularly to maintain AND AFTER SPORT
the effect until the ﬁnish, although it rance athletes. Toni Hasler is also a Optimal use of Red Bull as part of an can actually work to your advantage professional nutritional counsellor.
athlete’s diet varies, depending on when taken in the end phase,” explains the discipline. Athletes whose sport Toni Hasler. Mixing it with water and WHAT’S IN IT?
demands resiliency and coordination consuming it at regular intervals over The contents of the silver-blue cans need nourishment which stimulates a longer period of time will level out have given rise to a few discussions and enhances concentration, whereas the effects of sugar. Alternatively, and rumours. The composition is endurance athletes rely especially on the energy drink works like an added in fact not at all obscure: caffeine, ample energy reserves. A combination boost—and if timed properly, it will taurine, carbohydrates and vitamins of the two is ideal for athletes who play carry you right to the ﬁnish. (B6, B12) are the main ingredients and ball sports, team sports or compete in “Sport is both exertion and relief; the essential components of performance tournaments, athletes who have to per- right proportion is the key to success.” factors. Firstly, caffeine (one can contains form precise sequences of motion for Toni Hasler knows what it means to about as much caffeine as a cup of longer periods of time, be it shooting a take on and cope with an iron man or ﬁltered coffee) stimulates circulation ball through the hoop or performing a cycle race. Regeneration also means and the brain, leaving you feeling alert series of jumps on the snowboard.
and ready to perform. Secondly, taurine, The ﬁrst and most important rule, depots. This is where Red Bull can the substance which has contributed to however: Red Bull is not a substitute also be of service – not only after the myth about Red Bull, is an amino for an adequate intake of ﬂuids! Endu- acid which is actually produced by rance athletes in particular should mix and after training sessions.
their energy drink with water (a 1:1 ratio). rably broken down during endurance It is generally known that the intake of sports. Thirdly, carbohydrates, which staple foods should occur four hours For further information contact: Toni Hasler describes as the “super prior to major competitions involving Toni Hasler Sports Coaching fuel” in the human motor. Thanks to endurance. In contrast, a marksman www.toni-hasler.ch, ofﬁ[email protected] or chess player who consumes the Telephone +41 34 445 5808 nolactone, the energy value of a can energy drink ten minutes before the start of Red Bull is 135 kcal. Lastly, the B will beneﬁt from the vital kick. Bear in Brochures/nutritional information vitamins aid metabolism, namely in mind that a brief surge of sugar during for athletes: Red Bull Communications, the distribution and use of energy a competition has a negative effect on [email protected]

BCA-clinic Betriebs GmbH & Co. KG Dr. med. Armin Schwarzbach Facharzt für Labormedizin Increasing importance of co-infections for Lyme disease patients – with or instead of a Lyme disease infection An article by Armin Schwarzbach,M.D., PhD., laboratory medicine specialist In the past months presentations of scientific conferences have shown a noticeable increase of the importa

Testimonial by Dr Anil Kumar (Swami Shantananda) M.D., D.C.H. Kriyayoga Research Institute, Jhunsi, Allahabad, U.P., India I , a U.S. citizen and a medical doctor, has specialized in the care of children and young adults for the last 38 years. After practicing modern medicine mostly in the United States of America and also in England and India, I have returned to India