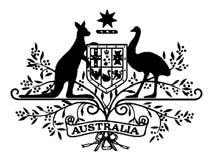 AUSTRALIA
Legal options for the post-2012 outcome
Submission to the AWG-LCA and AWG-KP
This submission provides initial Australian views on two possible legal options for the post-2012 outcome. The outcome will be the combined result of the AWG-LCA and the AWG-KP. Australia intends to provide further detailed proposals on possible legal approaches during the course of 2009. Australia reiterates its commitment to both the United Nations Framework Convention on Climate Change (the ‘Convention’) and the Kyoto Protocol. The post-2012 outcome must necessarily build on the lessons learnt from the implementation of these two treaties. Australia will be among those countries moving decisively to address climate change, including through the full implementation of its commitments. Australia considers that any post-2012 outcome should lead to an enhanced global commitment to mitigate and adapt to climate change, supported by greater cooperation on technology and assistance for clean development. Australia presents the following views from the perspective that the strongest and most effective post-2012 outcome will be one that can be ratified by as many parties as possible, including by the major economies. The post-2012 outcome will only achieve its purpose if implemented. The climate change regime will be severely undermined if future agreements go unratified or fail to result in action in key countries. Australia considers that there are two broad legal options for inscribing the commitments of parties to a post-2012 outcome. That is, the post-2012 outcome will consist of either (a) two protocols in the form of an amended Kyoto Protocol and a new protocol under the Convention; or (b) a single, new protocol that unifies action under the Convention and integrates the Kyoto Protocol. Under either option, the content of commitments would not differ in substance. A post-2012 outcome consisting of two protocols would see an amended Kyoto Protocol detailing a set of commitments for developed countries prepared to take action under the Kyoto Protocol, as well as a new protocol to the Convention to inscribe commitments for all countries, including with regard to elements of the Bali Action Plan. Both protocols would be agreed together as a part of a whole and indivisible package and require appropriately connected entry into force provisions. A single, new protocol to the Convention would consolidate all parties’ commitments to further operationalise the Convention. This protocol would supersede and incorporate key elements of the Kyoto Protocol but in no way diminish Kyoto Protocol commitments. A new protocol would provide a more comprehensive and ambitious basis for future action and has precedent in international law. A unified protocol would help streamline implementation and avoid interpretation difficulties likely to arise from having two protocols with similar provisions, such as on adaptation financing or flexibility mechanisms. Under either option, the body of a new protocol to the Convention would detail the rules and mechanisms for achieving the Convention’s objectives, including with regard to technology cooperation, support for clean development and flexibility mechanisms. Commitments for individual parties would be contained in separate national schedules designed to promote measurable, reportable and verifiable action, enhance flexibility and reflect differing national circumstances and capacities. Either option for achieving the post-2012 outcome will require extensive legal consideration by Parties. The AWG-LCA’s 2009 work plan will require a dedicated component addressing legal matters, which should complement on planned legal discussions in the AWG-KP. This will be a vital part of the work before Parties as the effort to achieve a comprehensive, effective and fair post-2012 outcome moves into full negotiating mode in 2009. 1 For example, in 1996 Parties agreed to modernise and replace the Convention on the Prevention of Marine Pollution by Dumping of Wastes and Other Matter 1972 (“London Convention”) with a more comprehensive and ambitious Protocol (“London Protocol”).

ON TRIPLE FACTORISATIONS OF FINITE GROUPSSchool of Mathematics and Statistics, The University of Western Australia, Crawley WA 6009, AUSTRALIAThe second criterion characterises triple factorisations of G in terms of a subset of ΩB havingLet G, Ω, ∆ and be as in Notation 1. Then the Embedding Theorem for imprimitive permutationrestricted movement. For a finite subset Γ of Ω, the mo