A review of the development of the IGCC classification each survival estimate was based is given to indicate the reliability validated by taking random bootstrap samples (100) (Efron and Tibshirani, 1993; Harrell et al, 1996).
An alternative and visually more attractive way of exploring and presenting interactions between risk factors is by growing a treethrough recursive partitioning (Breiman et al, 1984; Segal and Bloch, 1989; Ahn and Loh, 1994) that we used to constructclassification ‘5T’. A binary tree is built by the following process: The median follow-up time of surviving patients was 50 months.
first the risk factor that best splits the data into two groups, leading Disease progression occurred in 680 patients, and 533 patients to the largest decrease in prediction error, is determined (recursive died. The 5-year PFS was 78% (95% CI 76 – 79%) and the 5-year partitioning or splitting method). Splitting continues until the overall survival 82% (95% CI 81 – 84%). Most patients had as subgroups reach a minimum size or until no improvement can be primary site testis or retroperitoneum (97%), no NPVM (92%), made (stopping rule). The full tree, which is often too complex and and good AFP, HCG and LDH levels (84, 87 and 67%, respectively) overfit, is pruned using crossvalidation. All trees within one (Table 2). All risk factors were predictors of survival as indicated standard error of the lowest crossvalidated prediction error are by the Hazard ratios ranging from 2.1 to 6.2, where the tumour considered as equivalent. From these equivalent trees, the simplest marker AFP was the weakest risk factor in the univariable analysis.
is chosen as final tree (Breiman et al, 1984).
As a splitting method, the exponential scaling method was used (Therneau et al, 1990; LeBlanc and Crowley, 1992). The splittingprocess stopped when a minimum of five patients per groups was The regression-based weights of the risk factors in classification reached or when there was no further decrease in prediction error.
5R, and the cutoff points on the resulting sum score are presented We used 10-fold crossvalidation to determine the optimal tree size.
in Table 3, with the weights and cutoff points of the IGCC Modelling was performed with S-plus version 2000 using the RPART library that contains a recursive partitioning method for The weights suggest that differences between risk factors were present. Tumour marker AFP had a much lower weight in the The RPART library (rpart2.zip) and manual (rpart2doc.zip) can multivariate analysis than tumour markers HCG and LDH. As a be found at http://www.stats.ox.ac.uk/pub/SWin.
result, a poor AFP level (score 3) is not sufficient to be classified aspoor prognosis in classification 5R. Also, the combination of twoor three intermediate tumour markers, which would lead to an intermediate prognosis in the IGCC classification, results in a scoreof over 10 and thus in classification in the poor prognosis group in In all classifications, three prognostic groups were identified using classification 5R. The presence of risk factor NPVM (score 7) alone the estimated 5-year survival by sum score (classification 5R), was not sufficient to be classified as poor prognosis, in contrast combination of risk factors (5Ri) or binary tree (5T). Subgroups with the IGCC classification. Patients would only be classified as with a 5-year survival higher than 90% were considered as good poor prognosis when other risk factors besides NPVM or AFP are prognosis, between 65 and 89% as intermediate prognosis, and We identified four significant interactions in the Cox regression Furthermore for each classification, we explored the possibility model; between AFP and primary site (Po0.001), AFP and NPVM of identifying more subgroups. For the IGCC classification, this (Po0.01), HCG and NPVM (Po0.003) and HCG and LDH was carried out by allowing weights to vary from zero to four(instead of zero to two), and comparing all possible combinationson performance. For classifications 5R, 5Ri and 5T, we changed the Characteristics of 3048 NSGCT patients on the IGCC risk cutoff points on estimated 5-year survival. A 5-year survival rate higher than 90% was considered as good prognosis, 75 – 89% asintermediate prognosis, 60 – 74% as good-poor prognosis, 40 – 59% as intermediate-poor prognosis, and lower than 40% as poor-poorprognosis (Kollmannsberger et al, 2000). Survival of the five groups of the IGCC classification and classifications 5R, 5Ri and 5T was presented by Kaplan – Meier curves.
The classifications were evaluated by their ability to distinguishbetween patients differing in survival. An indication of the discriminative ability is the difference in 5-year survival rates between the good, intermediate and poor prognosis groups. A c- statistic was also calculated for both the three and five group classifications. For binary outcomes, the c-statistic is similar to the area under the ROC curve (Harrell et al, 1984). The c-statistic for survival data indicates the probability that for a randomly chosen pair of patients, the one having the higher predicted survival is the one who survives longer (Harrell et al, 1984). Overall performanceof the three and five group classifications was measured by model w2. When a model is developed and evaluated on the same data, the performance of the model is usually too optimistic. The optimism can be quantified with statistical methods, known as internal validation techniques (Steyerberg et al, 2001). To estimate and correct for the optimism in discriminative ability, the steps takenin the Cox regression and recursive partitioning were internally NPVM ¼ nonpulmonary visceral metastases.
British Journal of Cancer (2004) 90(6), 1176 – 1183 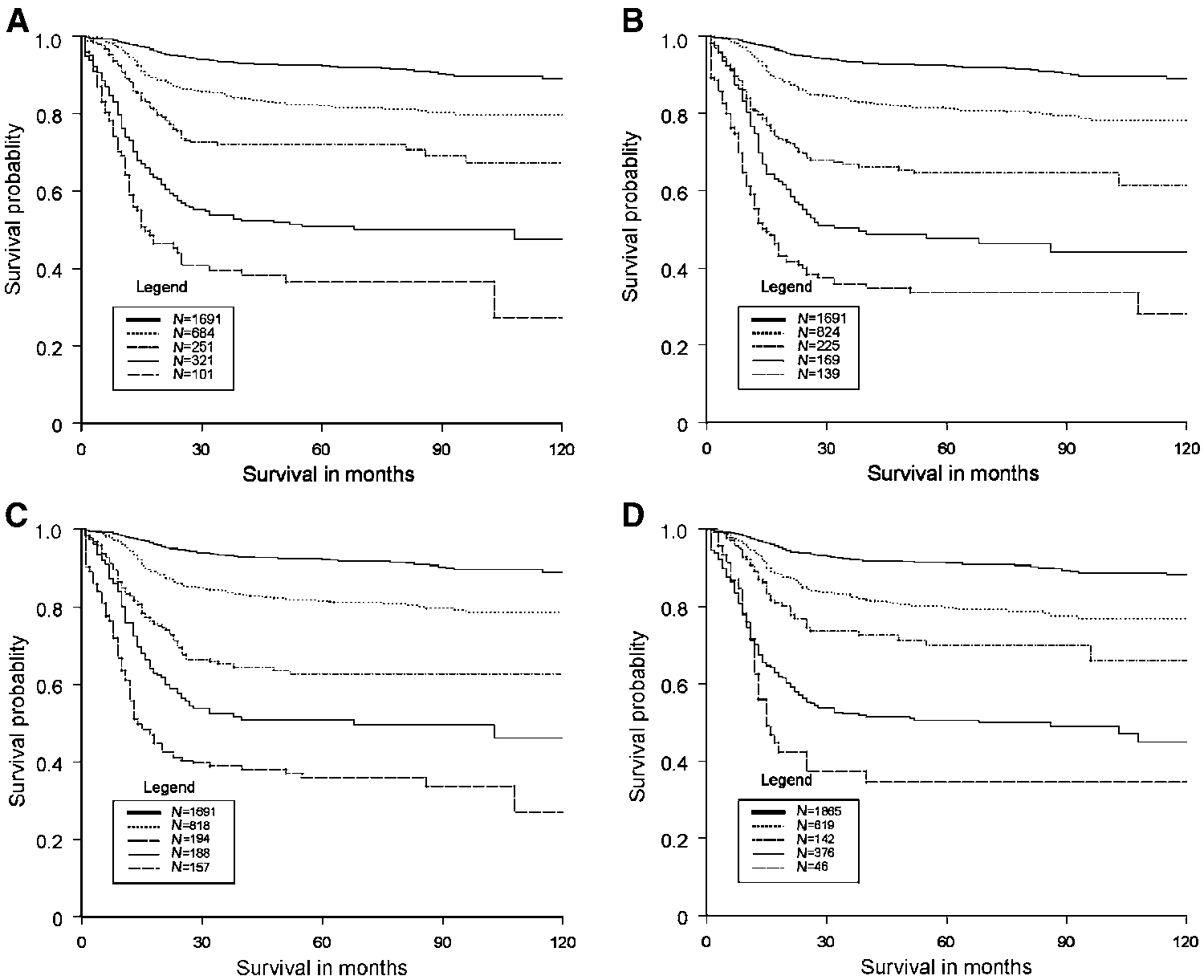 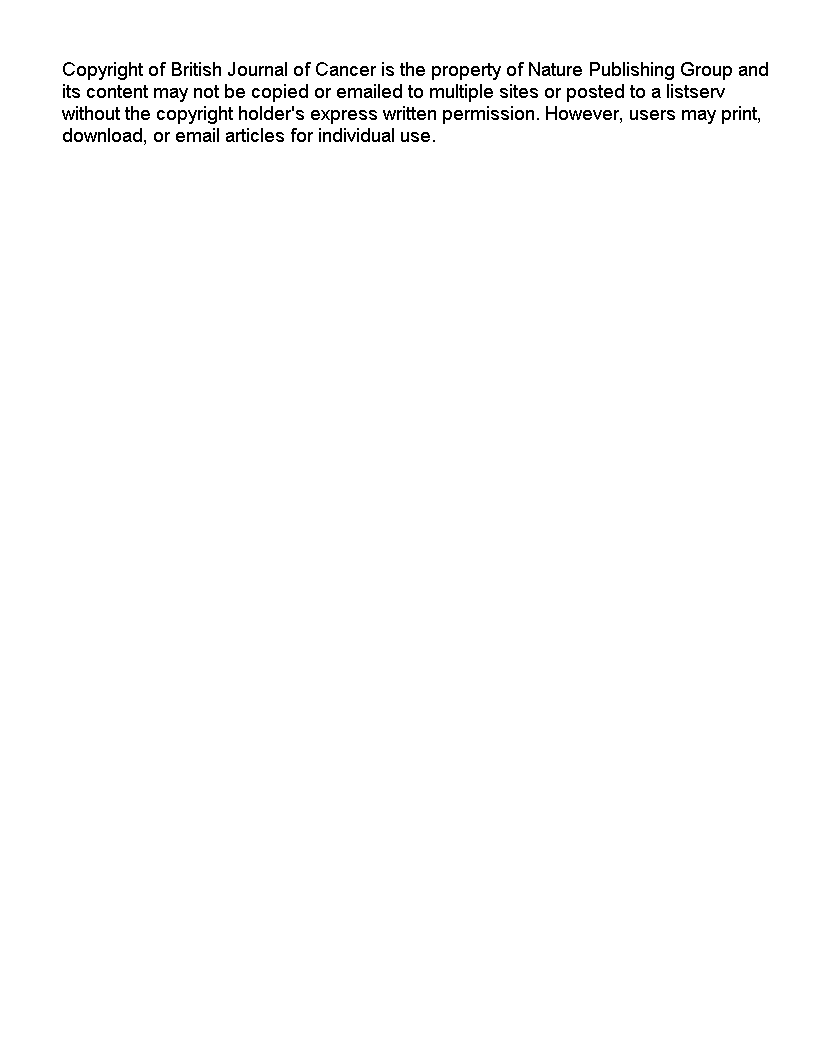