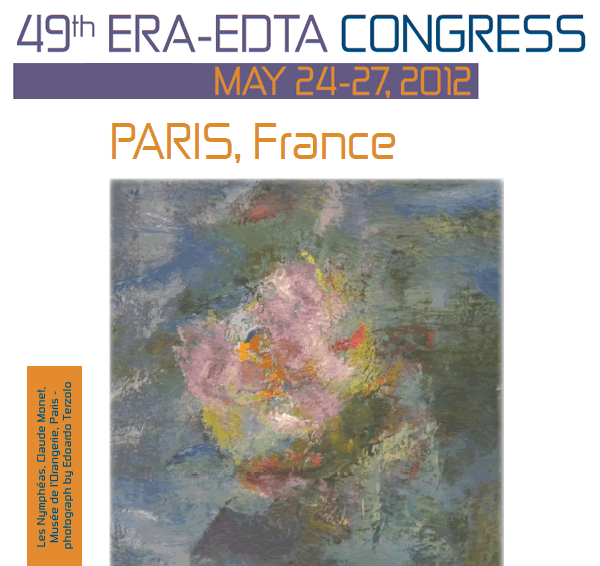 Press Office ERA-EDTA Congress 2010 | albersconcept | Jakobstrasse 38 | 99423 Weimar | Germany THE EFFECT OF DUAL BLOCKADE OF RENIN ANGIOTENSIN
SYSTEM (RAS) ON PROGRESSION OF TYPE 2 DIABETIC
NEPHROPATHY
José Luño, Head of the Department of Nephrology, Hospital General Universitario Gregorio Marañón, Madrid, Spain. RAS blocking has been shown to reduce proteinuria and the rate of decline of glomerular filtration rate (GFR) in proteinuric nephropathies, including diabetic nephropathy. In the Irbesartan Diabetic Nephropathy Trial (IDNT), the risk of serum creatinine doubling, dialysis or death was 20% lower in the angiotensin receptor blocker (ARB), Irbesartan group than in the placebo group, and these beneficial effects on the progression of type 2 diabetic nephropathy were not attributable to differences in the range of blood pressure (BP) achieved. A similar benefit was observed in the RENAAL study with losartan, another ARB, and this benefit of AR blocking for renal disease progression of type 2 diabetic nephropathy was clearly related to the antiproteinuric effect. Although it is clear that we need to suppress the RAS to protect the kidney in type 2 diabetes, this intervention may not suffice. Looking the decay GFR per year in these two major studies, RENAAL and IDNT, the benefit obtained, although significant, is still very poor in comparison with the normal rate of decline of GFR in relation to natural evolution with age, so there is a need to implement further measures to prevent progression of chronic kidney disease (CKD) in diabetic patients. In the search for new alternatives that could improve the antiproteinuric and renoprotective effects of RAS blockers, a combination of ACE inhibitors and ARB may prove useful. Recently, several authors have shown a more marked antiproteinuric effect achieved by dual blocking of the RAS, compared with ACE inhibitors or ARB in monotherapy and despite a similar effect on BP . However, until now there have been no controlled studies comparing dual blocking of the RAS with monotherapy in equipotential doses in type 2 diabetic patients with established nephropathy. In the ONTARGET study, which compared the efficacy of dual blocking with monotherapy using an ACE inhibitor (ramipril) or ARB (telmisartan) in patients with a high cardiovascular risk, there was no cardiovascular or renal benefit from dual therapy over monotherapy in any subgroup (coronary heart disease or diabetes). In this study, in which a renal composite endpoint (dialysis, doubling of serum creatinine, and death) was used, outcomes were similar for telmisartan or ramipril alone, although events were significantly more frequent with combination therapy even with low glomerular filtration rate and/or albuminuria. In ONTARGET, other surrogate renal endpoints unexpectedly showed contrasting results with an adverse effect of combination therapy on renal outcomes despite beneficial effects on proteinuria. Although the ONTARGET study was not specifically designed to detect differences in major renal outcomes in patients with type 2 diabetes and renal disease, less than 3% of the patients included had diabetic nephropathy, and death was the most common component of the composite primary outcome. ONTARGET was not designed to use equipotent doses. The same dose was used in monotherapy as in combination therapy, and because of that, dual blocking produced more potent blocking of the RAS and greater antihypertensive effects. Indeed, more patients in the dual blocking group showed significantly more adverse effects due to hypotension and a greater risk of developing acute renal failure. We conducted a multicentre open-label randomised controlled trial to compare combinination therapy with the angiotensin-converting enzyme (ACE) inhibitor lisinopril and the angiotensin receptor blocker (ARB) irbesartan with each drug in monotherapy (both at high and equipotent doses), with regard to their efficacy in slowing the progression of established type 2 diabetic nephropathy. The primary composite outcome was a >50% increase in baseline serum creatinine, end-stage renal disease (ESRD), and death. The study population comprised 133 patients with type 2 diabetic nephropathy (age 66±8 years, 76% males) from 17 different centres in Spain. Baseline values of mean estimated GFR and BP were, respectively, 49±21 mL/min/1.73 m2 and 153±19/81±11 mmHg. Median geometric baseline proteinuria was 1.32 (95% CI,1.1–1.62) g/g creatinine Patients were randomly assigned (1:1:2) to lisinopril (35), irbesartan (28), or the combination of both (70). The primary composite outcome was a >50% increase in baseline serum creatinine, ESRD, or death. After a median follow-up of 32 months, the frequency of the primary outcome was similar in the 3 groups: lisinopril (29%), irbesartan (29%), and lisinopril plus irbesartan (30%). There were no significant differences in the reduction in proteinuria or control of blood pressure between groups. The number of adverse events, including hyperkalemia, was similar in all three groups. LIMITATIONS of the study: it was not randomised in a double-blinded fashion, and the number of patients included was not excessively large, although it was considered that the estimated sample size based on a definition of CKD progression as increment of the serum creatinine higher than 50% may raise the number of patients that reach the primary end point
and could improve the power of the study.
CONCLUSIONS.- In patients with established type 2 diabetic nephropathy, the protective
effect of high-dose monotherapy with an ACE inhibitor (lisinopril) or an ARB (irbesartan) is
similar to that of the combination of lisinopril plus irbesartan.
For further information please contact
ERA-EDTA Congress 2012 Press Office

Tissue Engineering : Future of Pediatric EndodonticsDr. George Kurian Panampally, MDS*, Dr. Vivek M. Patil, MDS**,Dr. Rehan Khan, MDS***,During the last 10–15 years, there has been a tremendous increase in our clinical “tools” (i.e. materials,instruments and medications) and knowledge from the trauma and tissue engineering fields that can beapplied to regeneration of a functional pulp-de

Chlorine Dioxide The following fact sheet is part of a series relating to chemicals that may be used in authorized personnel according to the specific requirements of the applicable crisis exemption and approved decontamination plans. These chemicals are not intended for use by the general public. What is Chlorine Dioxide? Chlorine dioxide (ClO2) is an antimicrobial pesticide recognized for i