Price was not the only major factor. A long-term (13-week half life) TV advertising effect was measured, with one of the highest advertising elasticities in this study. If this had not been present, the fall in the sales index is estimated at 35. There was also a similar, but larger, effect from the total of competitors’ advertising. This however fell during months 12 to 20 to about two-thirds its level during earlier and later months. This is one of the reasons for a rise in Brand A’s sales at this time. There remain some isolated peaks to explain, in months 4, 15 and 16, 22 to 24 and 29. It is no surprise that these corresponded with particularly low prices (month 29 was the minimum). But some of these were accompanied by print advertising, and this is estimated to have a short-term effect, with a half life of two weeks. This has added up to 10 to the share index. Here is a typical story. Management has decided to gain share by reducing the relative price level, with some isolated price promotions. Some of these promotions have been supported with print advertising, increasing their effect. Meanwhile the brand is defended by rather continuous, brand-building, television advertising. This is not planned for immediate effect, but it has made a major contribution to the sales level. Competitors’ advertising also had long term effects, continuously threatening the brand with a decline which would have wiped out all their gains. The decline of Brand B can be traced to two causes, both of about equal size. Its advertising weight nearly halved during the two-and-a-half years. The adstock fit with a 26-week half life tells us that the support which this provided in the early months was worth 30 to the share index. The fall in advertising pressure at the end cost the brand about 15 on this index. The brand lost almost all its display over the same period, and this meant another fall of 15. The overall drop was not as bad as the total of 30, because management tried to maintain share by price reductions. The price elasticity was very small (–1.1 was estimated) so the effect was minimal (it must also have affected profit badly). There were isolated price promotions (particularly in months 21 and 25, the latter well supported with display) whose effect can be seen in the plot. In this case management may not have been aware of the long-term effects of advertising: no short-term effects could be seen, though the ad elasticity for the long-term effects is in fact good. They may also not have assessed the poor return to price cuts. They would otherwise hardly have led the brand downhill in this way. The loss of display must have been obvious. The attempts to stabilise the brand over the past year have had some success. NOTES & EXHIBITS
Simon Broadbent
Simon Broadbent is director of BrandCon Limited, a brand consultancy. His books include ‘The Advertising Budget’ and ‘Accountable Advertising’. His work has influenced ad thinking over three decades. 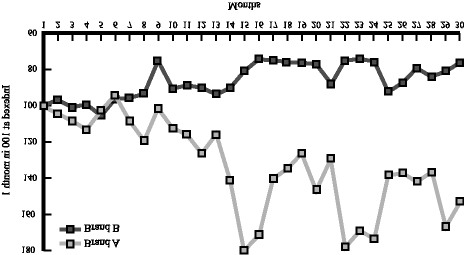 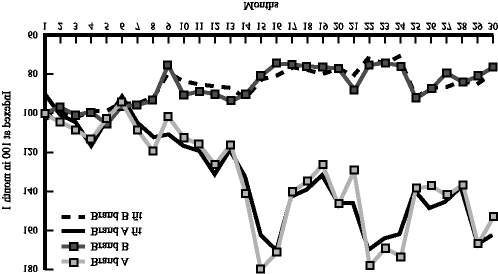 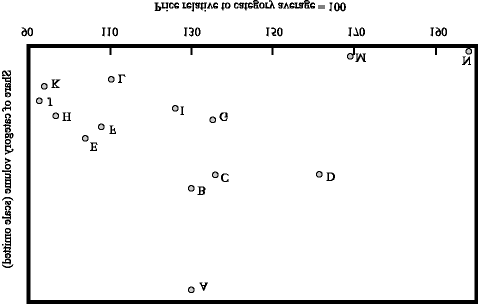