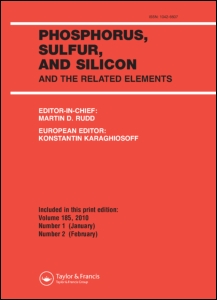 This article was downloaded by: [Isfahan University of Technology]On: 30 May 2010Access details: Access Details: [subscription number 907377393]Publisher Taylor & FrancisInforma Ltd Registered in England and Wales Registered Number: 1072954 Registered office: Mortimer House, 37-41 Mortimer Street, London W1T 3JH, UK Phosphorus, Sulfur, and Silicon and the Related Elements Publication details, including instructions for authors and subscription information: Characterization Reaction of Benzoyl Methylene Triphenylphosphoraneand Benzoyl Methylene Tri-n-buthylphosphorane with Rhodium (III) andRuthenium (III) Chloride. A Multinuclear NMR Study Seyyed Javad Sabouncheia; Kazem Karamiaa Bu-Ali-Sina University, Hamadan, Iran.
To cite this Article Sabounchei, Seyyed Javad and Karami, Kazem(2003) 'Characterization Reaction of Benzoyl Methylene Triphenylphosphorane and Benzoyl Methylene Tri-n-buthylphosphorane with Rhodium (III) and Ruthenium (III) Chloride. A Multinuclear NMR Study', Phosphorus, Sulfur, and Silicon and the Related Elements, 178: 7, 1559 — 1566To link to this Article: DOI: 10.1080/10426500307870URL: This article may be used for research, teaching and private study purposes. Any substantial orsystematic reproduction, re-distribution, re-selling, loan or sub-licensing, systematic supply ordistribution in any form to anyone is expressly forbidden.
The publisher does not give any warranty express or implied or make any representation that the contentswill be complete or accurate or up to date. The accuracy of any instructions, formulae and drug dosesshould be independently verified with primary sources. The publisher shall not be liable for any loss,actions, claims, proceedings, demand or costs or damages whatsoever or howsoever caused arising directlyor indirectly in connection with or arising out of the use of this material.

Phosphorus, Sulfur, and Silicon, 178:1559–1566, 2003Copyright C Taylor & Francis Inc.
ISSN: 1042-6507 printDOI: 10.1080/10426500390212960 CHARACTERIZATION REACTION OF BENZOYL
METHYLENE TRIPHENYLPHOSPHORANE
AND BENZOYL METHYLENE
TRI-N-BUTHYLPHOSPHORANE WITH RHODIUM (III)
AND RUTHENIUM (III) CHLORIDE.
A MULTINUCLEAR NMR STUDY
Seyyed Javad Sabounchei and Kazem Karami Bu-Ali-Sina University, Hamadan, Iran (Received January 2, 2003; accepted January 28, 2003) The reactions of title ylide (C6H5)3PCHCOC6H5, (BPPY) and (n-
C4H9)3PCHCOC6H5, (BBuPY) with rhodium (III) and ruthenium (III)
chloride in equimolar ratios using methanol as solvent have yielded
crystals of [(BPPY-H)3Rh], (1), [(BPPY)2Ru(MeOH)2(H2O)2]Cl3, (2),
and [Ru(BBuPY)Cl2S2]Cl (S = H2O or CH3OH), (3). The IR and 1H,
13C, 31P NMR data of the products were obtained. Analytical and NMR
data are consistent with the cyclometalated and octahedral structures
for (1) and (2) respectively.
Keywords: Phosphorus ylide; rhodium; ruthenium; ylide The coordination chemistry of the phosphoranes of the type R3P-CH+ is well known.1−4 Resonance stabilized phosphorus ylides, particularlythe keto ylides are also successfully used as ligand in organometallicand coordination chemistry owing to their accessibility and stabilitytowards air and moisture.5,6 Although many bonding modes are possi-ble for the keto ylides,7 the coordination through carbon is more pre- Downloaded By: [Isfahan University of Technology] At: 03:49 30 May 2010 dominant and observed with Pd (II), Pt (II), and Ag (I).8−10 We arecurrently interested in the synthesis and reactivity of metal deriva-tives of such ylides. As a general feature, the coordination chemistryof R3ECHCOR-type (E P, As) ligands appears to be dominated byC-(ylide) metal coordination although a few examples of O-(ylide)-bondcomplexes are known. P and As-ylides are remarkable ligands which We are grateful to the University of Bu-Ali-Sina for a grant and Mr Zebarjadian for Address correspondence to Seyyed Javad Sabounchei, Department of Chemistry, Bu-Ali-Sina University, Hamadan 65174, Iran. E-mail: [email protected]

have attracted much attention in synthetic, catalytic and theoreticalfields of transition metal chemistry.11 The large number of reportes onthe organometallic ylide chemistry covering most of the d-block andsome of the f-block elements may be explained with the structural va-riety of the ylide coordination modes. Carbonyl stabilized ylides of thetype R3E C(R)COR (E P, As, S; R = H, alky or aryl groups) exhibitinteresting properties such as a high stability (they can be handled inair) and an ambidentate character as ligands that can be rationalizedin terms of the resonance forms (a-c) (where c is represented by the cisand trans geometrical isomers): Forms b and c account for the metal C-coordination A and O-coordination B (either in the cisoid or transoid form) respectively: The chemical behavior of carbonyl-stabilized ylides is largly dom- inated by the C (ylide)-coordination,11,12 while very few example ofO-coordinated ylides are known.13 A symmetrical chloro-bridgeddimeric structure for the analogous complex data formed by the re-action of BPPY and BBuPY with potassium hexachloro rhodate (III)and ruthenium (III) chloride to account for its molecular weight datathe structure and their NMR data are not available. The aims of our Downloaded By: [Isfahan University of Technology] At: 03:49 30 May 2010 present work are (i) to correctly determine and compare the molecularstructures of the products formed by the title ylide with rhodium (III)chloride and ruthenium (III) chloride, and (ii) to characterize all theproducts by IR, 1H, 13C, and 31P NMR spectra.
EXPERIMENTAL DETAILS
Preparation of Ylide Ligand
Benzoyl methylen triphenyl phosphorane was prepared and character-ized by the published procedure.14 Preparation of Ylide-Rh (III) and Ru (III) Complexes
[(BPPY-H)3Rh] (1)
A solution of .0434 g (0.1 mmol) of potassium hexachloro rhodate (III) in a mixture of methanol and water was added to a methanolic solutionof .038 g (0.01 mmol) of benzoylmethylenetriphenyl phosphorane inmethanol and the mixture was stirred for 72 h at 35◦C. The solvent wasthen removed at room temperature. The yellow-brrown product waswashed with benzene and dried at room temperature. (Anal found: C,75.9; H, 5.4 cal: C, 75.55; H, 4.84) [(BPPY)2Ru(MeOH)2(H2O)2]Cl3 (2)
A solution of .380 g (1 mmol) of the above ylide in methanol was added to 0.2075 g (1 mmol) of RuCl3 in methanol and the mixture was stirredfor 24 h. On concentration by removing the solvent in the vaccuum, abrown dark, precipite was obtained. The brown product was washedwith benzene and dried at room temperature. (Anal found: C, 59.6; H,4.9 cal: C, 60.4; H, 4.85) [Ru(BBuPY)Cl2S2]Cl Complex (3)
A solution of 0.320 g (1 mmol) of the BBuPY in methanol was added to 0.2074 g (1 mmol) of RuCl3 in methanol and the mixturewas stirred for 12 h at room temperature. On concentration by remov-ing the solvent in the vaccuum, a brown dark, precipite was obtained.
The brown product was washed with diethylether and dried at roomtemperature.
RESULTS AND DISCUSSION
The v (CO) which is sensitive to complexation occurs at 1525 cm−1 in the Downloaded By: [Isfahan University of Technology] At: 03:49 30 May 2010 parent ylide, as in the case of other resonance stabilized ylides.15 Coor-dination of ylide through carbon cause an increase in v (CO) while forO-coordination a lowering of v (CO) is expected (Table I). Thus infraredspectra in the solid state show v (CO) in the range of 1620–1670 cm−1,at higher wave numbers with respect to the free ylide (BPPY, v (CO)1525 cm−1).15 A lowering of v (CO) observed for these two complexes at 1625 and 1620 cm−1 indicated coordination of the ylide through the carbon atom.
The v (P C) which is also diagnostic of the coordination occurs at998 cm−1 in (C6H5)3P-CH2 and at 887 cm−1 in (C6H5)3PCHCOC6H5.16These assignments were confirmed by comparing the IR spectra of the TABLE I v (CO) of Selected Phosphoranes and
Their Metal Complexes
[Pd{C6F5)(PPh3}2(APPY)]ClO4 corresponding 13C substituted ylides. In the present study the v (P+-C−) values for two complexes were shifted to lower frequencies for Rhand Ru complexes, respectively, suggesting some removal of electrondensity in the P C bond.
The 1H NMR data of the rhodium (III) and ruthenium (III) ylide complexes along with those of the parent ylides are listed in Table II.
The signals due to methine protons, when recorded in DMSO-d6 wereeither broad or unobserved probably due to very low solubility of thetwo complexes in DMSO-d6. The similar behavier was observed earlierin the case of ylide complexes of platinum (II) chloride17 and mercury(II) halides.18 In the 1H NMR spectra (1), (2), and (3), the CH ylide proton is shifted
down field compared to that of the free ylide (BPPY, 4.41) and (BBuPY,2.4) as a consequence of the inductive effect of the metal center. The Downloaded By: [Isfahan University of Technology] At: 03:49 30 May 2010 TABLE II 1H and 31P NMR Data of BPPY, BBuPY, and Their Complexes
with Rh (III) and Ru (III) Chloride (T = 298 K: J in Hz: TMS δ = 0.00 ppm)
Complex (1)
Complex (2)
Complex (3)
BPPY benzoylmethylene triphenyl phosphorane, in DMSO-d6 90 MHz, values (ppm) relative to internal TMS, in CDCl3, 90 MHz, values (ppm) relative to external 85%phosphoric acid. d, doublet; br, broad; m, multiplet. 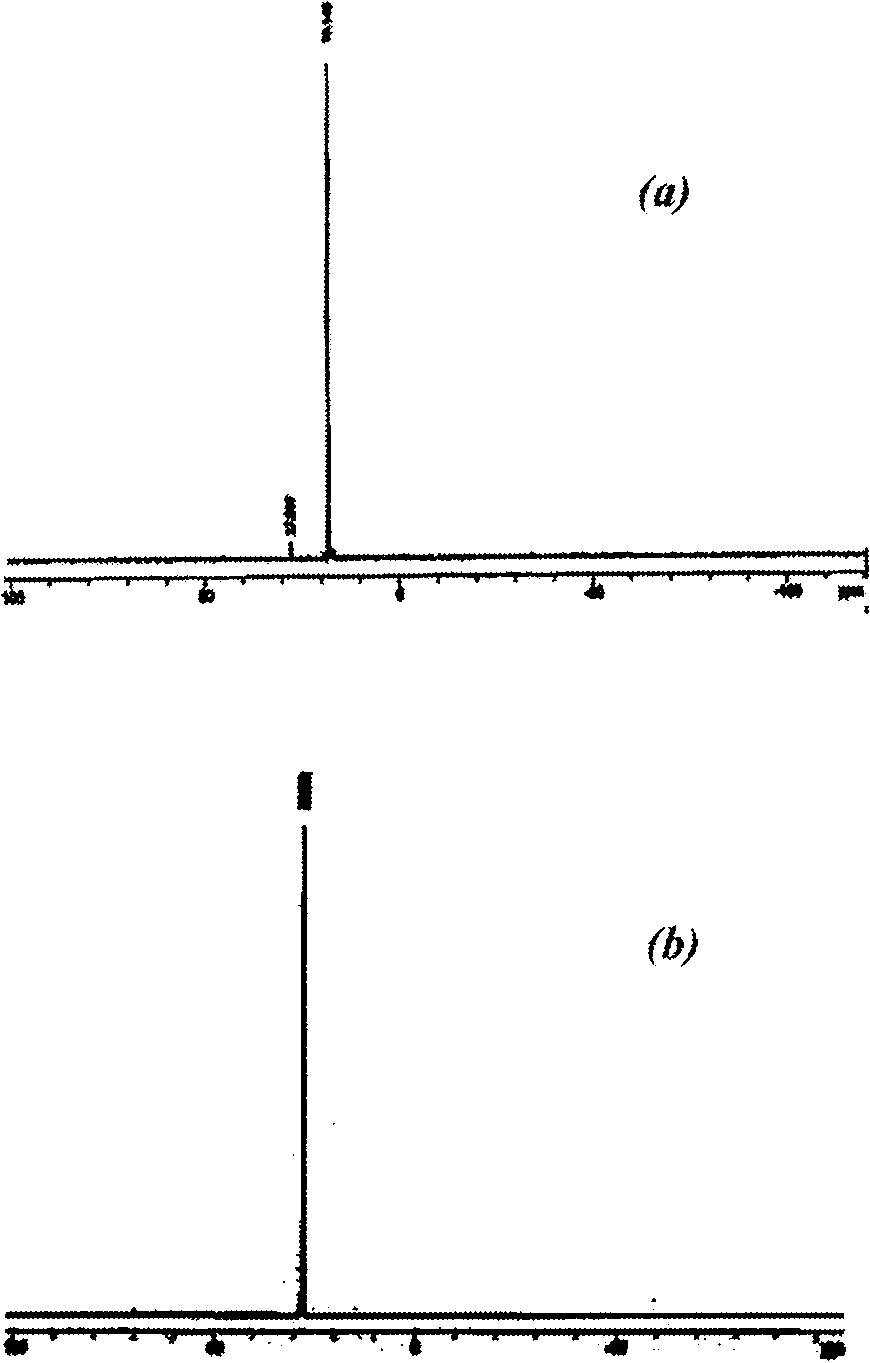 values of the 2J(H-P) coupling constant between the methine proton andthe phosphorus atom of the ylide ligands are lower than those of thefree ylide in agreement with a SP2 → SP3 rehybridization of the coor-dination to the metal atom.
The expected down field shifts of 31P and 1H signals for the PCH group upon complexation were observed in their corresponding spectra(Figures 1 and 2). The appearance of single signals for the PCH group inthe 31P and 1H NMR spectra indicates the presence of only one moleculefor all three complexes, as expected for C-coordination. It must be notedthat O-coordination of the ylide generally leads to the formation of cis Downloaded By: [Isfahan University of Technology] At: 03:49 30 May 2010 FIGURE 1 31P NMR spectrum of the free ylide BPPY (a) and the Rh (III),
complex (b). 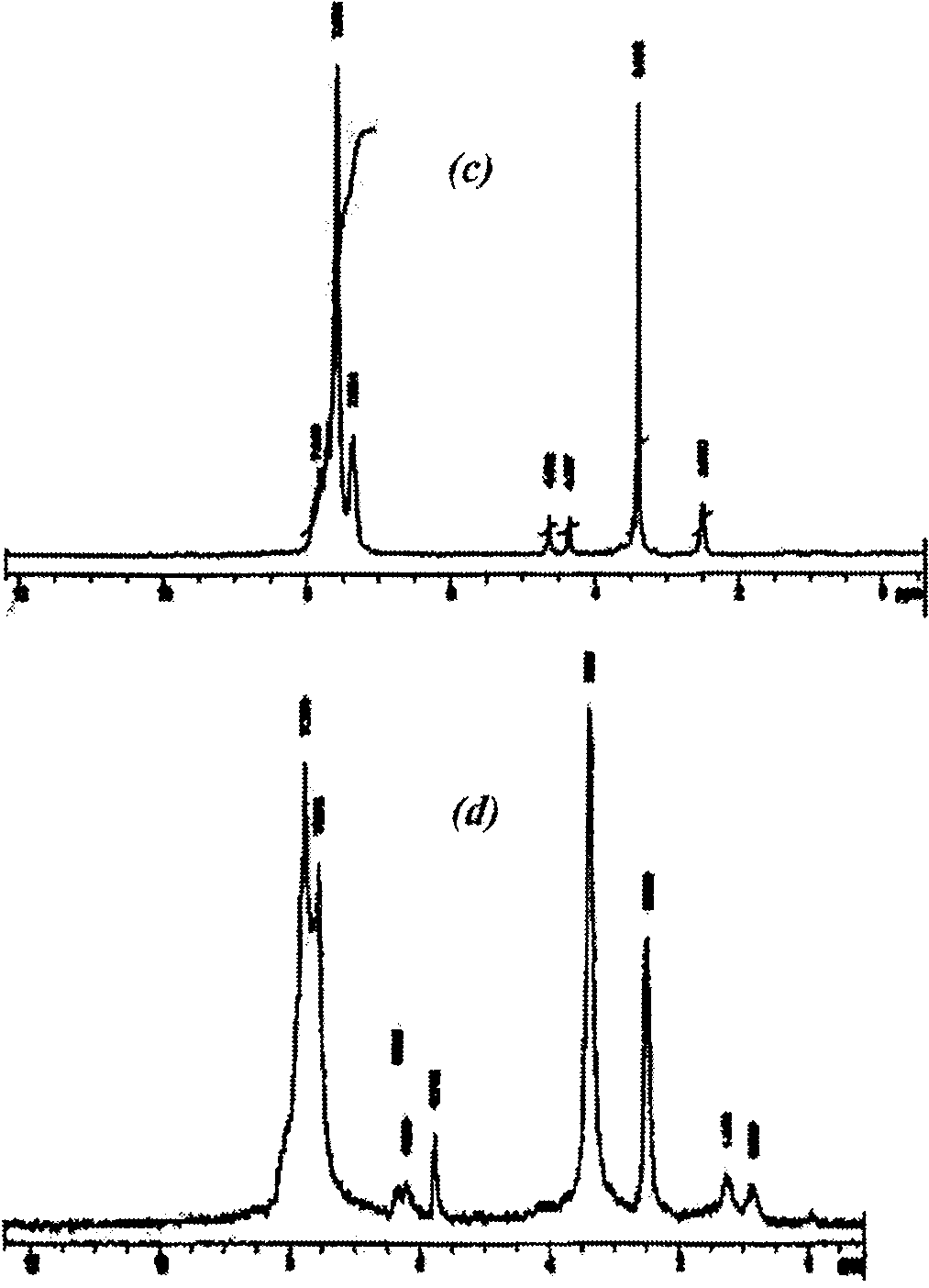