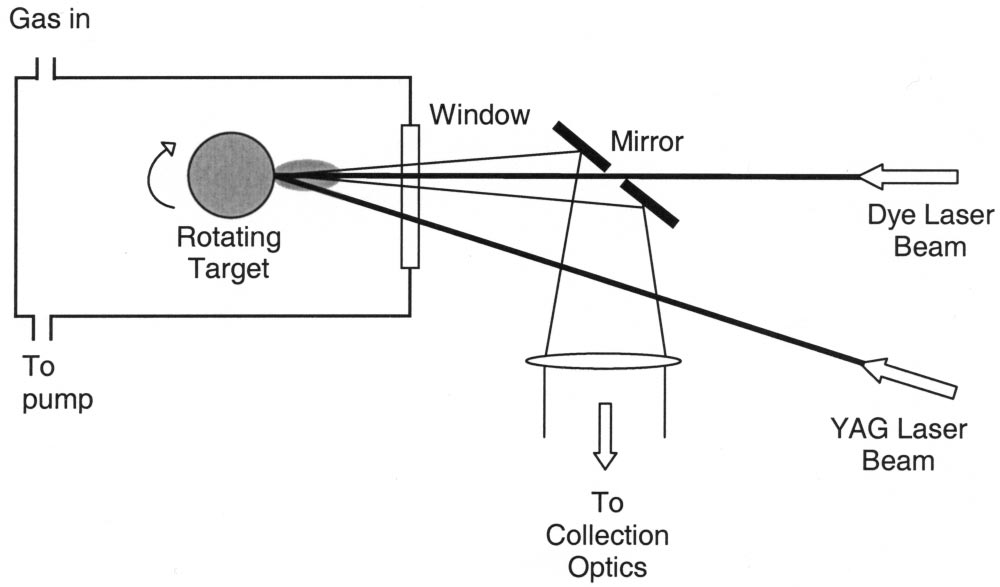 Resonance-enhanced laser-induced plasma spectroscopy for sensitive
elemental analysis: Elucidation of enhancement mechanisms
S. L. Lui and N. H. Cheunga)Department of Physics, Hong Kong Baptist University, Kowloon Tong, Hong Kong, China ͑Received 4 September 2002; accepted 30 October 2002͒ When performing laser-induced plasma spectroscopy for elemental analysis, the analytesignal-to-noise ratio increased from four to over fifty if the plume was reheated by a dye laser pulsetuned to resonant absorption. Time-resolved studies showed that the enhancement was not due toresonance photoionization. Rather, efficient and controlled rekindling of a larger plume volume wasthe key mechanism. The signal-to-noise ratio further increased to over a hundred if the atmospherewas replaced by a low-pressure heavy inert gas. The ambient gas helped confine and thermallyinsulate the expanding vapor. 2002 American Institute of Physics. ͓DOI: 10.1063/1.1532774͔ Laser-induced plasma spectroscopy ͑also known as tions were studied, the fluence of the 532 nm laser pulse was laser-induced breakdown spectroscopy͒ is a versatile tech- only about 800 mJ cmϪ2 ͑Ref. 9͒. The fluence of the dye nique for elemental analysis. It can be performed remotely laser pulse was about 460 mJ cmϪ2, which was marginally on practically any sample, and applications ranging from Unless stated otherwise, ablations were done under 1 demonstrated.1–3 Unfortunately, laser ignition of plasmas is atm of air although the sample chamber could be filled with chaotic and violent. Reproducibility and sensitivity are, different gases to any pressure. Light emissions from the therefore, compromised. We recently showed that the sensi- plasma were imaged axially onto the entrance slit of a spec- tivity could be improved if the plume was photoexcited trograph equipped with an intensified charge-coupled device resonantly.4 For example, we laser ablated a potassium-rich ͑ICCD͒. Analyte spectra were captured using a slit width of target doped with sodium as a test analyte. The expanding 300 ␮m, giving a 0.2 nm resolution. Lithium linewidths were plume was then intercepted by a dye laser pulse ͑404 nm͒ to measured with a 100 ␮m slit at 0.08 nm resolution. Time- resonantly excite the K atoms (4 2S integrated spectra were taken with an intensifier gate delay t 589 nm emissions were enhanced. Undoubtedly, the analyti- of 40 ns ͑relative to the onset of the 532 nm pulse͒ and a 5 ␮s gate width tb . For time-resolved studies, tb was 50 ns plasma spectroscopy ͑RELIPS͒ can be improved if the un- while td was scanned. The 50 ns tb was the electronic pulse derlying processes are better understood. In this letter, we width. The actual optical gate width was narrower.10 It was report a study of the RELIPS mechanism and illustrate how characterized by scanning the gate across the 532 nm light the sensitivity could be further enhanced.
pulse. The resultant pulse width was about 37 ns ͓full width Cylindrical pellets of potassium iodate (KIO at half maximum ͑FWHM͔͒, and the occurrence of the pulse ing 35 ppm of sodium were used as targets ͑for details, see maximum was located to within Ϯ 5 ns. For that reason, td Ref. 4͒. Lithium ͑55 ppm͒ was added when the plasma tem- was stepped at 5 ns for time-resolved studies. In all cases, perature T and electron density ne were to be measured:5 Twas determined from the intensity ratio of the Li 610.3 and670.8 nm lines, which was shown to be consistent with thatdeduced from the more conventional iron lines.6 ne was de-termined from the Stark width of the Li 610.3 nm line, whichwas shown to agree with estimates based on the linewidthsof the H␣ and H␤ transitions.6,7 However, ne deduced fromthe width of the Li 670.8 nm line, was found to be overesti-mated, and corrections were necessary. In separate experi-ments, pellets of sodium bicarbonate (NaHCO3) doped with50 ppm lithium were used as targets.
The experimental setup, shown schematically in Fig. 1, was similar to the one used previously.4,8 Briefly, a laserpulse ͑532 nm, 10 ns, and 10 Hz͒ from a Nd:YAG laser was FIG. 1. Schematic diagram of RELIPS setup. A rotating cylindrical pellet of apertured and imaged onto the side of the rotating target. 30 KIO3 housed in a sample cell was ablated by the second-harmonic ͑532 nm͒ ns later, a dye laser pulse ͑9 ns and 10 Hz͒ was focused output of a Nd:YAG laser pulse of 10 ns width. 30 ns later, the expanding normally onto the same spot. Because near-threshold abla- plume was intercepted by a dye laser pulse of 9 ns duration and 0.3 nmlinewidth centering on 404.4 nm. The plume emissions were directed ontothe entrance slit of a spectrograph equipped with an intensified array detec- a͒Author to whom correspondence should be addressed; electronic mail: tor. The sample cell could be evacuated or filled with various ambient gases Downloaded 27 Dec 2002 to 158.182.14.135. Redistribution subject to AIP license or copyright, see http://ojps.aip.org/aplo/aplcr.jsp 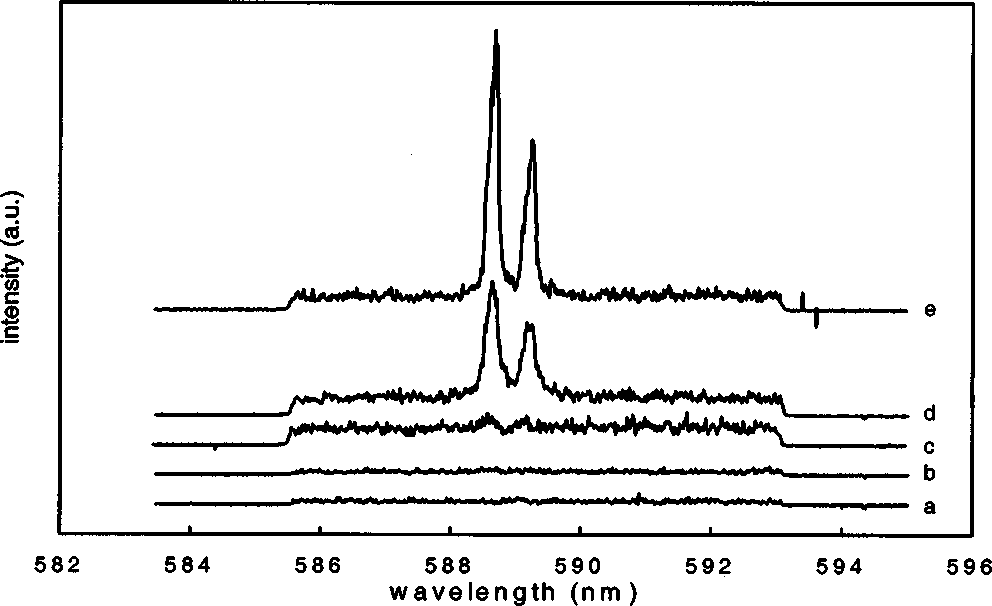 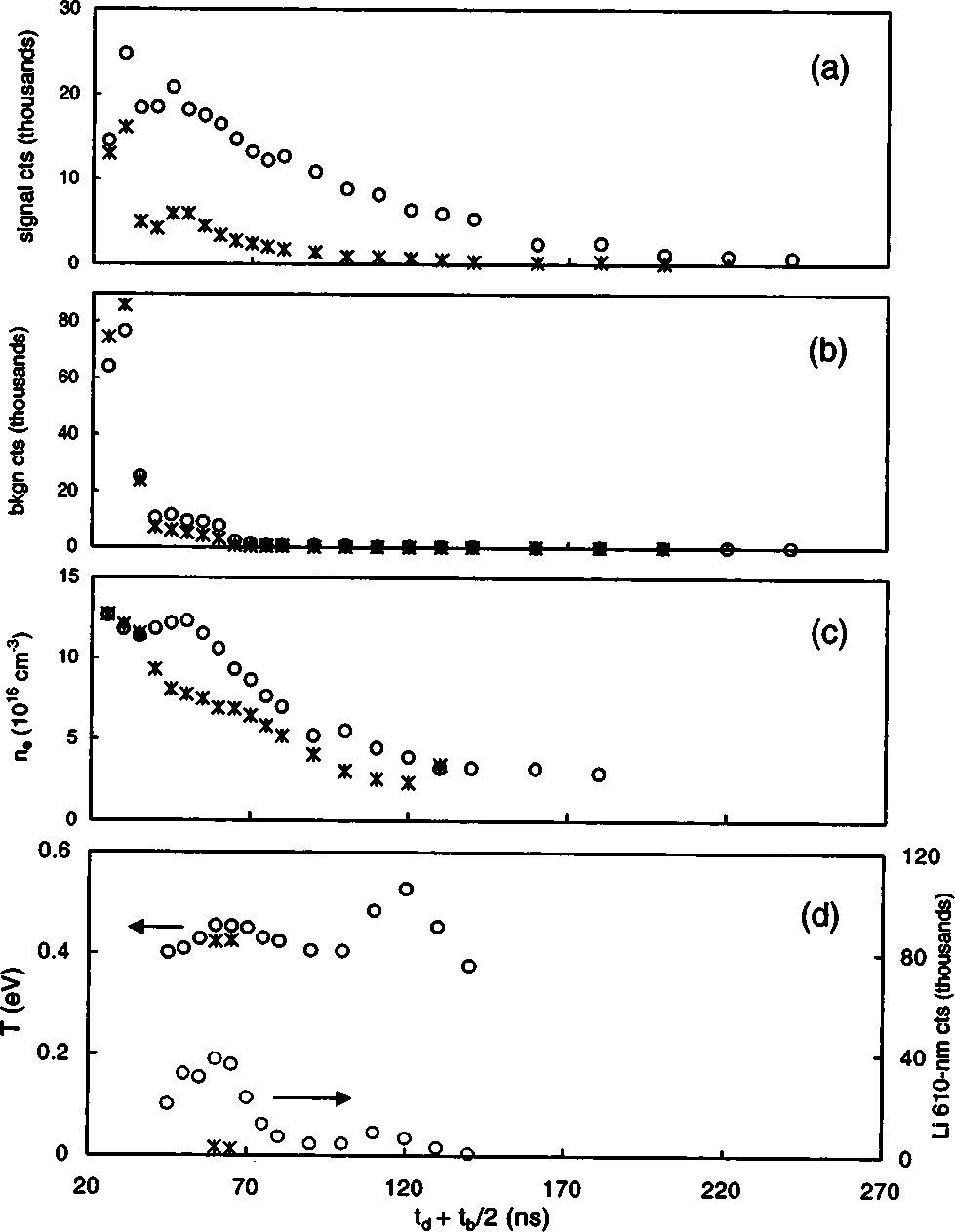 VICTOR L. RICCARDI, D.D.S., P.C. Welcome to our office. We hope to help you enjoy optimal dental health and make your appointments as pleasant as possible. If at any time you have any questions, please do not hesitate to ask. Please complete the following and remember it will be held in strictest confidence. PATIENT INFORMATION Patient Name__________________________________________