Multifocal ERG in chloroquine retinopathy: Revised version reveived: 1 February 1999 gional variance of retinal dysfunction troretinogram. In the multifocal nopathy, ophthalmologic evaluations rounding the center. In all three pa- fields and full-field electroretinogram l Conclusion: Chloroquine retinopa- The authors have no proprietary interest in was indicated by color vision distur- characteristic alterations in the mul- either the drug or the techniques used in this bances. The second patient had U. Kellner ()) ´ H. Kraus ´ M.H. Foerster Universitäts-Klinikum Benjamin Franklin, normal in the very early stages. Later, pigmentary changes develop in the macular area. In severe cases, further progression to generalized retinal degeneration Chloroquine has a dose-dependent toxic effect on retinal may occur even after cessation of medication [3, 4].
function during long-term administration [5, 6]. Early The best screening method for chloroquine retinopathy signs of functional changes can be paracentral visual has yet to be defined [2, 3, 5, 6]. Recently, a pathologic field defects, color vision deficiencies or reading diffi- multifocal ERG was described [14]. This report demon- culties. Deterioration of visual acuity and more pro- strates that chloroquine retinopathy of different severity gressed visual field defects are signs of an advanced ret- presents with characteristic alterations in the multifocal inopathy. Reduced amplitudes in the full-field electro- ERG.
retinogram (ERG) may be present. The retina appears present, and severe chloroquine retinopathy was evident In the multifocal ERG, the most severe functional al- The patient data are summarized in Table 1. All patients were fe- males who were taking chloroquine medication for rheumatoid dis- terations were seen in rings 2 and 3 (Figs. 1, 2). In ring 2, orders. Patients 1 and 2 were referred to our department because of amplitudes of the positive component were markedly ab- difficulties with reading or color vision within 4 weeks prior to ex- normal in both eyes of the three patients. In ring 3, am- amination. Patient 3 was referred for evaluation due to progressive plitudes were in the lower normal range in both eyes of visual loss 11 years after cessation of chloroquine medication. In all three patients the family history was normal regarding ocular patient 1 and the right eye of patient 2. Amplitudes were function and, apart from age, they had no known risk factors for ret- subnormal in the left eye of patient 2 and severely re- inal disease. All examinations were performed in conformity with duced in patient 3. In rings 1, 4 and 5, amplitudes in both the Declaration of Helsinki after informed consent had been ob- eyes of patient 1 and 2 were within the normal range ex- Full-field ERGs were recorded according to the ISCEV Standard cept for the left eye of patient 2 in ring 1. Patient 3 [9] as described in detail previously [8]. Multifocal ERGs were re- showed reduced amplitudes in both eyes in rings 1 and corded and analyzed with the VERIS Clinic II System (Tomey, Er- 4 and in the right eye in ring 5. The implicit times were langen, Germany) [12]. Recording was performed with maximally delayed in five of six eyes for the negative component dilated pupils following the full-field ERG using a Jet contact lens and in all eyes for the positive component in ring 2. In electrode. Refractive errors were corrected. For stimulation a black and white pattern of 61 hexagons was presented on a monitor ring 3, implicit times were delayed in all eyes for the (200 cd/m2 for white, 99.3% contrast). Duration of data acquisition negative component and in four of six eyes for the pos- was 4 min divided into eight sessions of 30 s. The response (first- itive component. In rings 1, 4 and 5, patients 1 and 2 order kernel) elicited by the central hexagon (ring 1) and summated showed normal or slightly delayed implicit times for responses elicited by concentric rings of hexagons surrounding the center (rings 2±5) were evaluated (Fig. 1). Based on manually con- both components in both eyes. In patient 3, the implicit trolled cursor placement, amplitudes and implicit times were deter- times of rings 4 and 5 were delayed for both components mined for the first negative and positive component of each trace. in both eyes.
Amplitudes were expressed relative to their respective area (nV/ deg2). The normal ranges for these amplitudes and implicit times were defined by calculation of the median and the 95% confidence intervals in one eye of 15 age-similar probands. Multifocal ERG Discussion stimuli location and anatomical areas (according to Polyak [10, 15]) correspond roughly as follows: ring 1 to the fovea, ring 2 to the parafovea, ring 3 to the perifovea, ring 4 to the near periphery The multifocal ERG allows the determination of local and ring 5 to the central part of the middle periphery.
cone and bipolar cell activity at the posterior pole and thus provides a means to analyze regional variances in retinal dysfunction [7]. In chloroquine retinopathy, se- vere functional changes in the macular area were pres- ent in the multifocal ERG despite a normal or almost normal full-field ERG. The results of the multifocal Results of clinical and functional evaluation are given in ERG indicated a severe dysfunction of the outer retina detail in Table 1. Patient 1 had an early chloroquine reti- in the parafovea and perifovea. In the fovea and towards nopathy. In patient 2 a more advanced retinopathy was the periphery, the outer retina was less affected. This 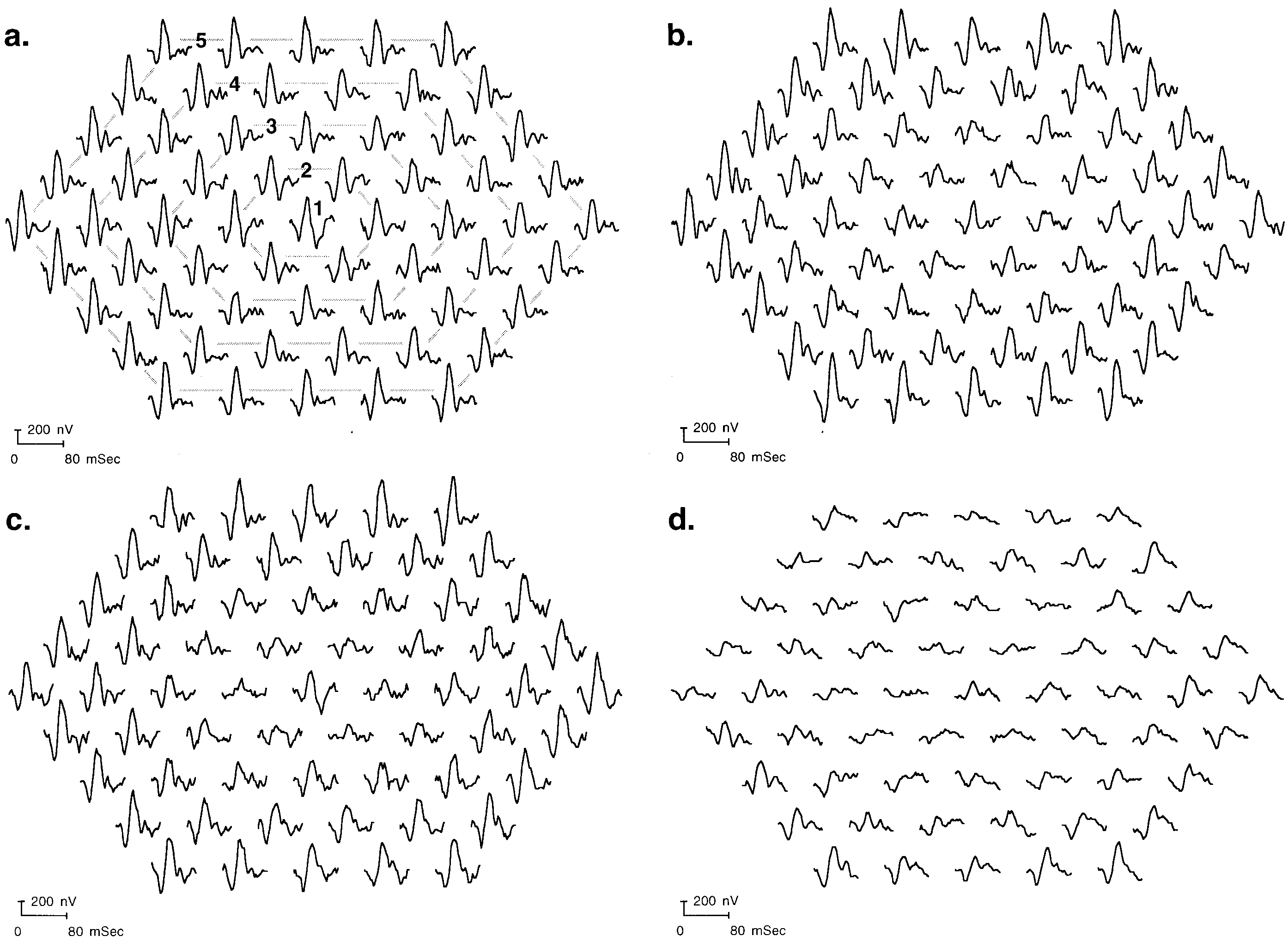 Fig. 1a±d Multifocal ERG trace array: recordings from a a normal though one would also expect a similar dysfunction in subject, b patient 1, c patient 2 and d patient 3. In the recording from the more peripheral areas of the retina, the contrary the normal subject, rings 1±5 are indicated. In all three patients the was found in this study. A certain genetic disposition amplitudes in ring 2 and 3 are predominantly reduced of the paracentral cones to damage by chloroquine is un- likely because more severe changes in the perifovea were seen in all retinal neurons in the rhesus monkey distribution of pathologic alterations was evident in ear- [11].
ly stages and remained in severe chloroquine retinopa- From the present results it is impossible to determine whether amplitude reduction or implicit time delay occurs The distribution of functional loss is in accordance earlier in chloroquine retinopathy. The regional distribu- with previously reported histologic data. In advanced tion of pathologic changes was similar for the two param- chloroquine retinopathy normal numbers of bipolar eters. The delay of implicit times of both the negative and and ganglion cells but severe loss of rod and cone outer positive components of the multifocal ERG may indicate and inner segments were described [1, 11, 13]. In the fo- either a primary disorder of the cones or a further defect vea, however, cones remained present despite severe in the bipolar cells.
loss of parafoveal cones. There are no obvious reasons The multifocal ERG may be a helpful technique in why the parafovea and perifovea are more susceptible cases of suspected chloroquine retinopathy with inconclu- to chloroquine than the fovea. Histologic data revealed sive findings. Further detailed evaluation is necessary to that rods are earlier affected than cones [11]. One might define whether the multifocal ERG might be superior to speculate that due to the primary loss of rods, the fovea other screening methods such as central visual field test- would show less dysfunction than the parafovea. Al- ing or color vision [3, 5]. 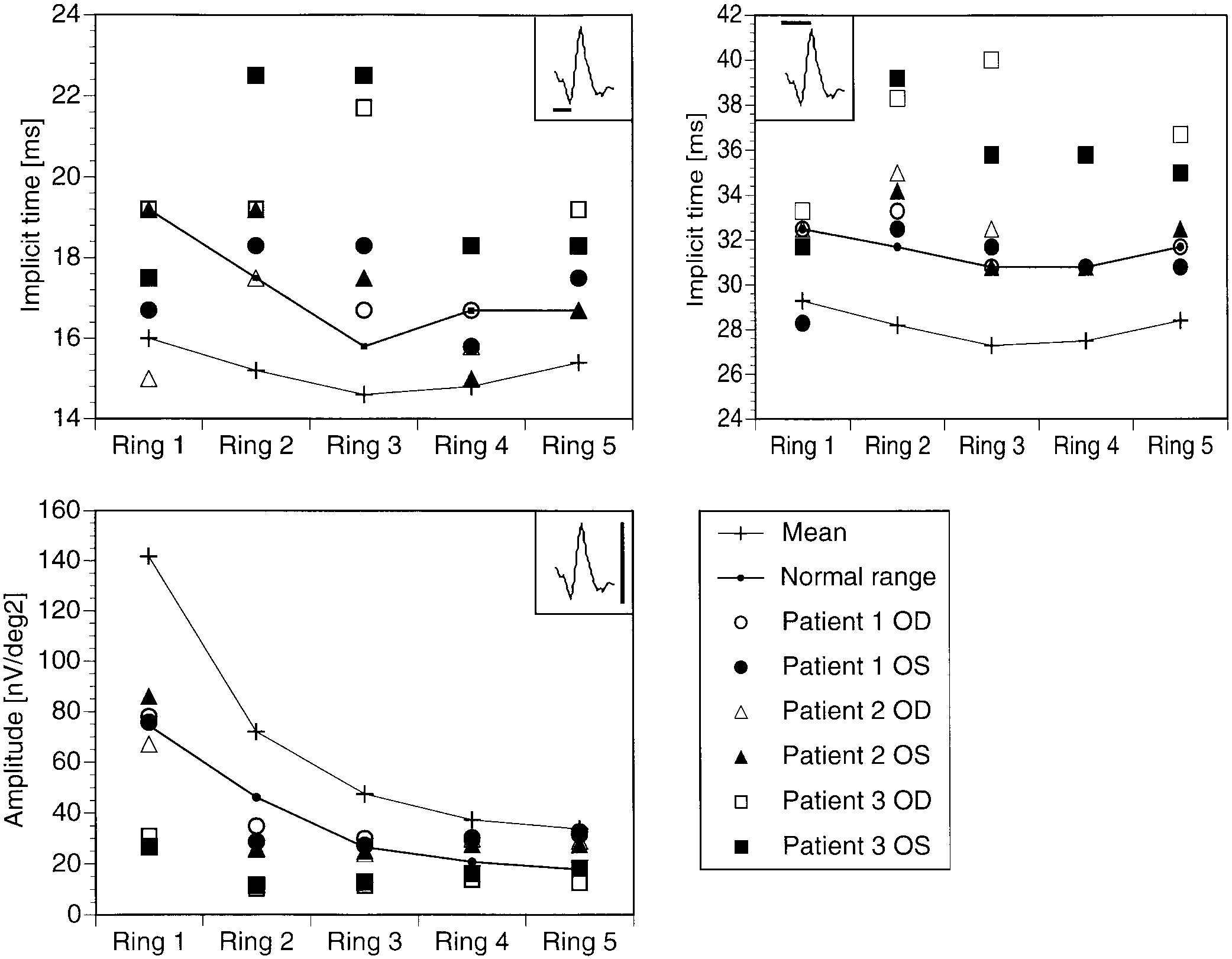 André Seidenberg , Dr.med. LEGAL ABORTION BY MEDICATION Emergency call: +41 44 266 58 03 Abortion by medicaments is an outpatient treatment. You may stay at home or in our medical practice. Up to 7 weeks after the beginning of the last menstrual bleeding, abortion induced by the following two medicaments is the methode of choice:  Mifegyn® (Mifepriston or RU486) blo