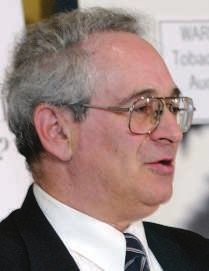 Kansas Standards Evolve Again
UC Balks at Campus-Wide Ban on
Eighteen months after its state educationboard adopted science standards promotingthe teaching of intelligent design (ID), Kansas Tobacco Money for Research
is set to toss them out. Next month, a newly the grant do not violate university policy aligned board expects to adopt standards that University of California (UC) has delayed (for example, by excluding foreigners). As voting on a plan to impose a blanket ban on of last year, there were 19 active grants at The change follows elections that flipped research funding from tobacco companies.
UC supported by the tobacco industry, total- the board’s 6–4 conservative majority to a ing $15.8 million. (UC’s total grants and 6–4 margin for moderates (Science, only U.S. university to forbid tobacco dol- contracts added up to $4 billion that year.) 11 August 2006, p. 743). As a result, the board replaced the former chair, ID proponent anguished over the issue for 4 years before tobacco-funding ban, however, they asked the senate for input. That’s when things got com- fought against the ID-tainted standards since regents—to take a stand. Instead, the regents plicated. “The tobacco issue put our princi- by a committee appointed by the board that delivered a product deemed unacceptable by conservatives. “We’ll be glad to bring back standards that do not contain supernatural explanations and are in line with national and international norms,” says Sue Gamble, a moderate board member. “These standards will help teachers to strengthen the teaching –YUDHIJIT BHATTACHARJEE
ing manuscripts or threateningto cut off funding, Glantz No Roving for Moon Rovers
Budget troubles at NASA will likely nix plans Faculty fission. Stanton Glantz (left) would like to see a blanket ban to send a series of sophisticated robotic rovers on tobacco funding at UC, but James Enstrom (right) says such a ban to the moon after the agency sends an orbiter there next year. NASA officials blame a tight exploration budget and the rising cost of the punted it back to the faculty last week.
allowing a threat to academic freedom.
rovers, which were meant to find possible “It’s a very good decision,” says James Enstrom disagrees. “I do not feel that any human landing sites and gather scientific Enstrom, an epidemiologist at UC Los Angeles tobacco funding arrangements I’ve had have data. Industry and agency sources say that up who uses Philip Morris money. “Academic manipulated my academic freedom,” he says.
to half of the roughly $800 million set aside freedom makes this a great university, and the In 2003, Enstrom published a study in the over the next 3 years for rover development at faculty need time to consider this issue more British Medical Journal that found no relation Marshall Space Flight Center in Huntsville, thoroughly.” But Stanton Glantz, a bio- Alabama, could go to Goddard Space Flight engineer and antitobacco crusader at UC San deaths. The project was partially funded by the Francisco, turns the argument around: “The Center for Indoor Air Research, which itself is Research Center in Mountain View, California, tobacco industry funds research to confuse funded by tobacco companies. Enstrom says to design smaller and cheaper spacecraft that E. ENSTROM the public,” he says. “This manipulation of the scientif ic process subverts academic that it added an important minority opinion to The decision to cancel the original set of freedom and is antithetical to the fundamental the smoking debate. “Thankfully, UC doesn’t rovers comes just a few months after NASA chief Michael Griffin moved the program from funded,” he says. “My entire career has been Ames to Marshall. That decision, sources say, based on the academic freedom I’ve had.” was made to please Congress’s Republican- 2003, seven units within the university sys- dominated Alabama delegation, but the recent regents reflected the divisiveness of the election, which put Democrats in the driver’s Public Health and the UC San Diego Cancer issue. On one hand, the faculty asserted that seat, took pressure off the agency. The remain- “grave issues of academic freedom would der of the would-be rover funding would cover money. But UC’s faculty-composed Acade- be raised” if the regents banned funding budget shortfalls in NASA’s effort to develop a mic Senate voided these bans in May 2005, based solely on its source. On the other, they launcher to replace the space shuttle, slated for retirement in 2010. The proposed cuts are authority to decline funding—and that they suppressed, and that the tobacco industry part of the agency’s 2009 budget request to had to do it for the entire system or not at all.
–ANDREW LAWLER
CREDITS (LEFT TO RIGHT): PROVIDED BY S. GLANTZ/UCSF; PROVIDED BY J. money from any source, as long as terms of

the governing body appeared as divided as lightly, … but [accepting tobacco money] the senate. “I believe a yes vote [on this Institute in Buffalo, New York, says he’s dis- ingly to send the issue back to the faculty. An appointed with the delay. “It’s good to academic freedom,” said Regent Jefferson debate academic freedom,” he says, but “if Coombs at the meeting. “It would convey a whether a blanket tobacco funding ban truly you can’t choose on this, you can’t choose signal that we do not trust our world-class faculty.” Regent Richard Blum countered –DAVID GRIMM
With Change in the Seasons, Bird Flu Returns
High alert. Since H5N1 virus was detected in Japan this month, officials have been checking blood samples from poultry at neighboring farms. have dodged the bullet since its cluster of out- 6 weeks later by outbreaks in Japan. “The breaks in 2004, confirmed that the virus hit one outbreaks in Japan and South Korea suggest after patients were given the drug. However, to me free-flying birds as the most likely ori- the Egyptian samples showing resistance were farm on the 23rd. South Korea, which last gin,” says Sims. Both countries are trying to taken just 2 days after Tamiflu treatment began, November suffered its first outbreak since con- determine how the virus was reintroduced. an unusually short period in which to develop taining the virus in 2004, reported that the virus “The reasons for these failures need to be resistance, says NAMRU-3 commanding offi- had turned up on a fifth poultry farm. Several examined and the lessons applied elsewhere,” cer Bruce Boynton. What’s more, the virus in wild birds found dead in Hong Kong tested says Sims. But overall, he says the speed of both patients had a rare resistance-conferring the response, particularly in Thailand and mutation, called N294S, seen only in one pre- 20 January reported its fifth human death Vietnam, “is a positive sign and shows that from the virus in just 10 days, bringing its death toll to 62, by far the most of any country.
In Indonesia, four of the five recent human suggests “a more disturbing” theory: that The increase in outbreaks in the Northern response, the city government on 17 January already harbored the mutated virus. If more established pattern. The reason for the sea- ordered residents who keep backyard poultry sonality is still not well understood, says Les to eat, sell, or cull their birds by the end of the H5N1 patients who don’t respond well to Sims, a veterinarian based in Manunda, Aus- month or have them confiscated and destroyed.
Tamiflu. And if such a resistant strain were tralia, who advises the U.N.’s Food and Agri- The government is talking of gradually replac- to spawn a pandemic, the world’s vast Tamiflu culture Organization (FAO). It is likely to be ing the live markets that currently account for some complex interaction among several fac- 80% of poultry sales in the city with slaughter- tors, including cooler temperatures enabling houses. “It would be a sea change culturally,” mine whether the patients had the resistant the virus to survive longer in the environment, says John Weaver, senior adviser to FAO in strain before they took the drug and whether greater poultry trade in preparation for winter Jakarta. If done properly, he says, eliminating virus from a third suspected H5N1 patient in festivals, and movements of wild birds.
backyard poultry could reduce the opportunity the household, who also died, has the same for the virus to survive in the environment. But mutation, Boynton says. Veterinary virolo- Korea and Japan is particularly notable. In he cautions against a sudden prohibition, gists are also checking to see whether the both the winter of 2003–’04 and this year, which could lead smallholders to hide their mutated virus can be found in birds in Egypt.
outbreaks in South Korea were followed 4 to fowl and refuse to cooperate with animal dis- –DENNIS NORMILE AND MARTIN ENSERINK

How does energy availability affect the Did you know that 99 percent of women’s peak BMD is attained by our early 20s? The opportunity to further increase BMD is very limited after this time. Thus, the adolescent and If female athletes and exercising women do not have sufficient teenage years are a particularly important time for optimising energy available for adequate hormo