Liver - 03327
Original Paper
Immune-related Effects of Local Hyperthermia
in Patients with Primary Liver Cancer
Valentina V Ostapenko1, Hiroto Tanaka2, Motoshige Miyano1, Takahiro Nishide1, Hiroki Ueda2
Iwao Nishide1, Yoshimasa Tanaka1, Masatoshi Mune2, Susumu Yukawa2
1Shouseikai Nishide Hospital, and 2Third Department of Internal Medicine Corresponding Author: Dr. Valentina Ostapenko, Shouseikai Nishide Hospital Tel: +81 724 32 0777, Fax: +81 724 36 3074, E-mail: [email protected] KEY WORDS:
ABSTRACT
Background/Aims: To investigate immune-related
decreased significantly (p<0.05), whereas the rela- effects of local hyperthermia (HT) with hepatocellu- tive amount of CD4+ T cells showed a tendency to decrease (p=0.063), and CD8 - to increase (p=0.088).
Methodology: Immune status after 7 HT was stud-
An activation of NK cells was observed in patients ied in 11 patients (M/F - 9/2; 1st group). The effects who had a low or normal pretreatment level of acti- were also evaluated during one HT session in 4 of vation. In the 2nd group, there was a significant ABBREVIATIONS:
decrease in the CD4/CD8 ratio by the end of the The HT treatment was performed by means of an 8- treatment (p<0.05) and increased activity of NK MHz capacitive heating device, Thermotron RF8 cells as early as 20 min after the onset of HT (Japan). The mean time of one HT session was 60 min. HT was performed 1-2 times a week. In both Conclusions: Our results suggest that HT stimu-
groups the percentage of T and B cells, CD4+, CD8+ lates the immunity of cancer patients by several subsets of T cells, the CD4/CD8 ratio and activation means and therefore may exhibit indirect anticancer effect. In addition, activation of NK cells by HT may Results: In the 1st group, CD4/CD8 ratio was be associated with improved quality of life.
INTRODUCTION
Heating: The HT treatment was performed by
The rate of hepatocellular carcinoma (HCC) has means of an 8-MHz capacitive heating device, "Ther- been increasing in Japan. Most cases are associated motron RF-8" (Yamamoto Vinita Co., Ltd., Osaka, with HCV infection. The mechanism of HCV-related Japan). The electromagnetic power ranging from 614 carcinogenesis and disease progression are not well to 1363 W was applied between two 30-cm electrodes understood, although it is thought that not only virus- placed on opposite sides of the patient's upper abdom- induced but also immunologically mediated mecha- inal region. Overlying water boluses were placed between the electrode and the skin to improve the Such local methods as transcatheter arterial homogeneity of the heating. A saline solution main- embolization (TAE) and percutaneous ethanol injec- tained at 2-15°C was circulated in the boluses to avoid tion therapy (PEIT) are widely used in the treatment overheating of the skin. For premedication, 50mg of inoperable HCC. However, it has been reported that indomethacin (i.r.) was administered 30 min before the TAE procedure might suppress a host immunity HT. A 1% xylocaine topical gel was applied to the skin response against cancer in HCC patients (3). Recently to decrease the sensation of heat. Blood pressure and local hyperthermia (HT) has been widely used for can- pulse were monitored during treatment. The time of cer treatment as a way to increase a tumor's radio- one HT session was 40-60 min. HT was performed 1-2 and chemosensitivity (4,5). In contrast to most other times a week. A total of 8 sessions delivered 1-2 times cancer treatment modalities, HT is also known to a week, were performed (1 course). Thermometry was cause an activation of the immune system (6-10).
In this study, the potential of local HT to enhance Laboratory data: In the first group (N=11), the
the cell-mediated immunity of HCC patients was percentage of T and B cells, CD4+ and CD8+ subsets, the CD4/CD8 ratio and activation of natural killer(NK) cells were evaluated before the 1st and 8th ses- METHODOLOGY
sions. In the 2nd group (N=4) the same immune para- Patients' characteristics: Clinical characteris-
meters were investigated during one 60-minute HT tics are summarized in Table 1.
session, namely, before the onset of heating, 20 and 40 Hepato-Gastroenterology 2005; 52:1502-1506 H.G.E. Update Medical Publishing S.A., Athens-Stuttgart 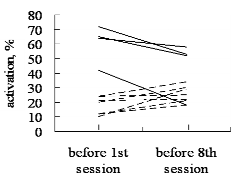 Lila L. Schmidt, MD OB/GYN, Reproductive Endocrinology/Infertility 3969 4th Avenue, Suite 207 San Diego, CA 92103 619/295-4050 SanDiegoMommyMaker.com EMBRYO TRANSFER Procedures, Instructions and Expectations How is the embryo transfer performed? A speculum is placed in the vagina to provide access to your cervix, much like the way it is during your annual pap s

MEDICATION GUIDE NEXIUM  (nex-e-um) (esomeprazole magnesium) Delayed-Release Capsules NEXIUM  (nex-e-um) (esomeprazole magnesium) For Delayed-Release Oral Suspension Read the Medication Guide that comes with NEXIUM before you start taking NEXIUM and each time you get a refill. There may be new information. This information does not take the place of talking with you