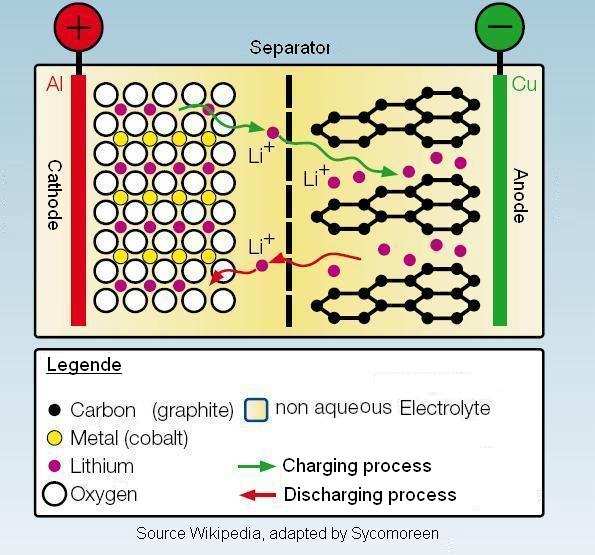 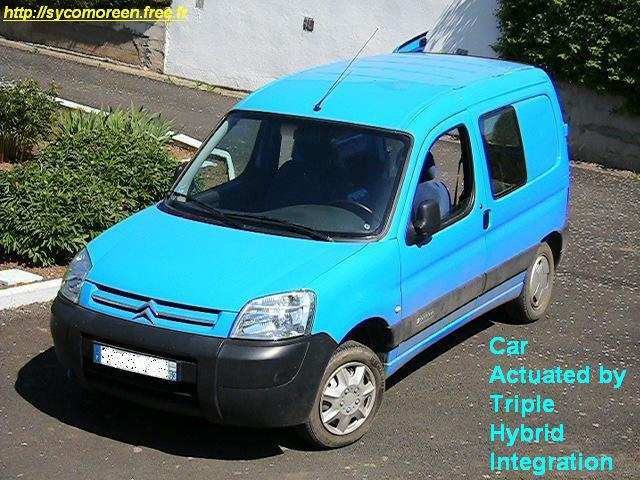 Electrochemistry of the Lithium-Ion accumulators And notably the LiFePO4 SYCOMOREEN allows any reproduction of this document for non lucrative scientific research or school and pedagogic purposes. ↵ On the left : overall structure of a Lithium-Ion accumulator (Li-ion) with LiCoO2 type, but also valid for other variants :
Cathode : Crystalline matrix of oxidized metal. The industrialized variants are CoO2 (Cobalt
dioxide), MnO2 (Manganese dioxide) and FePO4 (iron phosphate, used by CATHI). An aluminium
collector is driving the generated or absorbed electronic flux by this electrode. It is the positive pole of
the battery.
Anode : Crystalline matrix of graphite. A copper collector is driving the generated or absorbed
electronic flux by this electrode. It is the negative pole of the battery.
Electrolyte : organic aprotic solvent (often carbonates of alkyls) with dissolved Lithium salts (often
LiPF6). There is an alternative for the liquid electrolytes : the gelled polymers with polyvinyl fluorides
(battery « Li-Po »). In both cases, the material is designed to ease the migration of the Lithium ions
Li+ between the cathode and the anode.
Voltage : about 3,3V for the LiFePO4 or 3,6V for the LiCoO2 or 3,8V for the LiMnO2
Chemical reactions while discharging (on the example of LiFePO4)
Cathodic reduction : Li
+ FePO + xLi+ + xe− → LiFePO Anodic Oxidization : Li C
with n an integer and 0<x<1 Net reaction
: Li
+ Li C + FePO → LiFePO + nC
Commentaries : the discharging entails a LiFePO4 formation at the cathode while the Lithium
graphite is dividing into carbon and Li+ cation at the anode. The crystalline shapes which are
combination between Lithium, metal oxides and carbon are still not well known : they appear as an
intercalation process of the Lithium elements, as well ionic as atomic. For the numbers of oxidization,
the Lithium is reduced at the cathode by passing from +I to 0, in the same time, it is oxidized at the
anode while passing from 0 to +I. Thus the migration of x Lithium cations generates the transfer of x
electrons from the anode towards the cathode.

Commentaries : the charging shows the destruction of LiFePO4 at the cathode while the Lithium
graphite is appearing at the anode. The process of intercalation of the Lithium elements, as well ionic
as atomic, takes place in the reverse way in comparison with the discharging time. Regarding the
numbers of oxidization, the Lithium is reduced at the anode by going from +I to 0, while it is oxidized
at the cathode by coming from 0 to +I. Thus, the migration of x Lithium cations generates the transfer
of x electrons from the cathode towards the anode.
Notices and perspectives about the Lithium batteries
Regarding the LiFePO4 : This version has a little lower voltage (~3,3 V) but is staying more
reliable, less toxic and less expensive. (the cobalt, nickel, or manganese are costly). Moreover, the
iron can be easily recycled. For the chemical aspect, this cathode is very stable and doesn’t leave
dioxygen which can start Lithium fires inside the LiCoO2 / LiMnO2 batteries.
A very large range of accumulators : the Lithium-Ion accumulators are not linked with a specific
electrochemical couple. Any material which is able to store Lithium ion or atoms by intercalation can
be used for Lithium-ion technology. Thus the Li-ion batteries are declining themselves with :
The material at their cathode (very numerous choices of metal oxides) The material at their anode : often graphite/graphene, but research is active for this matter (amorphous Silicon, Lithium titanate Li5T4O12, tin dioxide SnO2, several experimental nanocrystals …) The electrolyte or the polymer of migration for the Li+ cations Moreover, some transverse technologies are adding like the LMP battery (Lithium metal polymer) which uses microsheets of Lithium metal, of insulator, of electrolyte (the Batscap battery developed for the Bolloré Blue Car). It explains the big variety of batteries with ionic Lithium, whereas before, the Lead/Acid or Nickel
batteries knew only few evolutions and/or variants (for example the electrolytic evolutions with the Pb
gel and absorbent Glass ; the Nickel Metal Hydride (NiMH) to replace the Cadmium; more original,
the ZEBRA battery with its melted salts of Sodium and Nickel Chloride).
What hyphens ? What distinguishes all the Lithium batteries nevertheless, it is the strong mass
energy or density, but also their big weakness to any overvoltage, under-voltage or current too strong.
Indeed, it damages in an irreversible manner either the cathode, either the anode, either the polymer/
electrolyte Therefore, an effective controlling electronics and permanent balancing of the batteries are
absolutely necessary (called BMS: Batteries' Managing System); it penalizes the Lithium in the
automotive domain since its applications require very strong currents for the acceleration and the
regenerative the braking, and full charges and discharges to increase the autonomy.
A good autonomy ? In spite of everything, the densities of energies really remain too weak in
comparison with the hydrocarbons. For example, to get the mechanical energy provided by the
combustion of one kg of gas (about 3 mechanical kWh), it is necessary to carry about 30 kg of
Lithium batteries. In other words, a tank of 50 L of gas is equivalent to 1 500 kg of ionic Lithium
batteries.
Thus Sycomoreen recommends the triple hybridization NiCad / LiFePO4 / Hydrocarbons. Car Actuated by Triple Hybrid Integration

Siemens Healthcare Diagnostics, the leading clinical diagnostics company, is committed to providing clinicians with the vital information they need for the accurate diagnosis, treatment and monitoring of patients. Our comprehensive portfolio of performance-driven systems, unmatched menu offering and IT solutions, in conjunction with highly responsive service, is designed to streamline workflow, en

Evaluation of Anderson et al., (2003) Effects of iontophoresis current magnitude and duration on dexamethasone deposition and localized drug retention. Physical Therapy 83:161-170 The Anderson et al. (2003) paper may be broken into two sections. The first part evaluates the efficiency of dexamethasone delivery using a model of the human body. The second part, unrelated to the first