Liquid loadable tablets of neusilin® us2 - a new approach to tabletting lipid formulations, the case of cyclosporine a 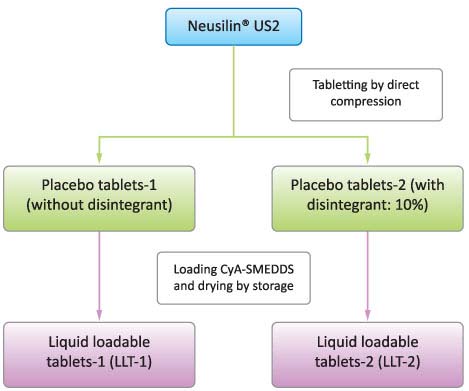 Are you facing the chal enges of converting SMEDDS/SEDDS formulations into oral solid dosageforms? A simple way to achieve could be through liquid loadable tablets of Neusilin® US2.
Introduction
The transformation of self-micro emulsifying drug delivery systems (SMEDDS) or lipid formulations
into a solid dosage form can be carried out by capsule fil ing, spray drying, adsorption on to solid
carriers, and melt granulation as wel as other techniques. Among these techniques, capsule fil ing
and absorption on to solid carrier techniques are more popular. However, the capsule fil ing
techniques are usual y associated with some problems such as leaking, leaching of liquid through the
capsule shel , and incompatibilities with capsule materials. On the other hand, adsorption onto solid
carrier techniques also has some concerns such as large amount of carrier required or large dosage
volume, sticking, liquid exudation, and low tablet hardness. In a new study by Camil a Sander and Per
Holm (2009), Cyclosporine A (CyA) SMEDDS with Neusilin® was used as a drug model for liquid
loadable tablets (LLT). Placebo tablets of Neusilin® US2 (Magnesium Aluminometasilicate or MAMS)
prepared by direct compression was loaded with CyA-SMEDDS to prepare liquid loadable tablets.
This is a novel approach to transform liquid lipid formulations into solid dosage forms [1].
Fig.1 Preparation of liquid loadable tablets Cyclosporin A is an immunosuppressant drug widely used in post-al ogeneic organ transplant to reducethe activity of the patient's immune system. Cyclosporine A exhibits very poor solubility in water, and,as a consequence, suspension and emulsion forms of the drug have been developed for oraladministration and for injection.
Experimental methods
The test formulations are showed in Table 1. The LLTs of approximately 250 mg were made by direct
compression of Neusilin® US2 with and without crospovidone, assigned as LLT-2 and LLT-1,
respectively (Fig.1). The composition of LLT-1 (F2) was MAMS/Magnesium stearate (99:1w/w%),
whereas the composition of LLT-2 (F6) was MAMS/Crospovidone/Magnesium stearate
(89:10:1w/w%). The placebo tablets with hardness above 50 N and porosity of approximately 80%
were achieved at compression forces around 15-22 MPa with conventional tabletting equipments. The
LLTs were placed in excess of CyA-SMEDDS and allowed to absorb until constant tablet weight was
reached. Excess liquid on the surface was removed by tissue paper. The tablets were dried by
storage for few hours. No leaking was observed. Bioavailability tests were carried out using beagle
dogs.
Table1. Test formulations

The LLTs were easily prepared by direct compression with conventional tabletting equipments.
No leaking of the liquid content on the surface of the LLTs.
The manufacturing process can easily be scaled up.
In conclusion, the LLT technology can be a promising approach to achieve oral solid dosage formsfrom liquid lipid formulations.
Reference
1. Sander C, Holm P. Porous magnesium aluminometasilicate tablets as carrier of a cyclosporine self-emulsifying
formulation. AAPS PharmSciTech. 2009. 10:1388-95
Neusilin® is a trademark or registered trademark of Fuji Chemical Industry Co., Ltd in Japan, United States of America, Europe and/or other countries. To ensure to receive this newsletter in your inbox, please add [email protected] to your address book.
The information found in this publication is presented in good faith with no guarantee or obligation as to accuracy and noassumption of liability. Users should make their own tests to determine the suitability of these products for their own particularpurposes. However, because of numerous factors affecting results, Fuji Chemical Industry makes no warranty of any kind, expressor implied, including those of merchantability and fitness for particular purpose other than the material conforms to its applicablecurrent standard specifications. Statements concerning the use of the products or formulations described herein are not to beconstrued as recommending the infringement of any patent and seller assumes no liability for the infringement arising out of suchuse. ®2011 - Fuji Chemical Industry Co., Ltd. - All Rights Reserved

Michael Anderson is a registered Psychologist in private practice in Torquay, Victoria. He has been practicing mindfulness meditation consistently since 1987. In 1990 he became increasingly interested in Buddhism and mindfulness practice, and has from this time worked to integrate Western psychology and Without a personal practice of mindfulness Mindfulness mindfulness

H.E. Professor Olugbemiro Jegede Secretary General Association of African Universities (AAU) Accra – GHANA An invited Keynote Speech at the Special Congregation for the Award of First and Higher Degrees and the Presentation of Prizes of the 6th Convocation Ceremony Holding at Covenant University, Ota, Nigeria on Friday July 22, 2011 Page 1 of 11 Introductio