J CATARACT REFRACT SURG - VOL 31, OCTOBER 2005 Management of infectious keratitis following laser Eric D. Donnenfeld, MD, Terry Kim, MD, Edward J. Holland, MD, Dimitri T. Azar, MD, F. Rick Palmon, MD, Jonathan B. Rubenstein, MD, Sheraz Daya, MD, Sonia H. Yoo, MD Laser in situ keratomileusis (LASIK) is the most commonly not diagnosed on initial presentation. Nine patients re- performed refractive surgical procedure for the correction quired flap excision, and 1 flap sloughed spontaneously.
of ametropia. The advantages of LASIK include rapid visual One case required enucleation, and 10 required penetrating rehabilitation, decreased stromal scarring, less irregular keratoplasty for visual rehabilitation.
astigmatism, minimal regression, less postoperative pain, In most cases, it is difficult to determine the origin of and the ability to treat a greater range of refractive disor- the infection. A recent ASCRS survey of infectious keratitis ders.Unlike surface-ablation procedures, LASIK pre- following photorefractive keratectomy (PRK) and LASIK serves the integrity of Bowman’s membrane and the for the year 2004 (Donnenfeld, ASCRS 2005) revealed a overlying epithelium, thus decreasing the risk for microbial significant decrease in atypical mycobacteria, with only keratitis. However, microbial keratitis following LASIK has 2 cases reported. Prophylaxis with a fourth-generation become an increasingly recognized, sight-threatening com- fluoroquinolone was not done in either case. Sixty-one per- cent of cases reported in this survey were due to Staphylo- The incidence of infectious keratitis following LASIK is coccus bacteria. Forty-eight infections were reported by difficult to estimate and can vary widely depending on the 46 surgeons who had performed an estimated 102 300 pro- source of the information. One large retrospective study in- cedures; an incidence of 1 infection for every 2131 proce- vestigating the complications associated with LASIK found dures performed during the year 2004.
an incidence of 2 infections in 1062 ; a similar study A review of the published reports of LASIK-associated found an incidence of 1 infection in 1019 eyes.A more re- microbial keratitis in the peer-reviewed literature reveals cent case series of LASIK-associated infections encountered over 100 cases with a striking preponderance of atypical at a single institution reports an estimated incidence be- mycobacterial (47%) and staphylococcal (19%) species.
tween 1:1000 and Based on a comprehensive re- Another interesting yet concerning observation regarding view and analysis of the literature on infections following these atypical mycobacterial LASIK infections involves LASIK, Chang et state that the incidence of infection their ability to occur in clusters or epidemics. Separate clus- after LASIK can vary widely (0% to 1.5%). In a survey by ters of atypical mycobacterial infections following LASIK the American Society of Cataract and Refractive Surgery have been published in the peer-reviewed literature. Chan- (ASCRthe incidence reported by LASIK surgeons dra et al.report a series of 7 eyes in 4 patients, all of whom who had experienced an infectious keratitis was 1 in had hyperopic LASIK at the same surgery center by the 2919 cases performed during the year 2001. In this study same surgeon on the same day. The causative organism, My- of 116 cases, 76 presented the first week after surgery, 7 cobacterium chelonae, presumably originated from a contact during the second week, 17 between the second week lens that was used intraoperatively to mask a portion of the and the fourth week, and 16 after 1 month. The most com- laser’s ablation. Another cluster is reported by Fulcher and mon organisms cultured were atypical mycobacteria (33 of coauthin 7 eyes of 7 patients; Mycobacterium szulgai 116 cases, 28%) and staphylococci (23 of 116 cases, 20%) was traced back to the ice that was used to chill BSS on species. In 47 of the 116 cases, infectious keratitis was the surgical field. Freitas et al.report a cluster of infectionsin 11 eyes of 10 patients; M chelonae was found in the por-table steaming unit used to clean the microkeratome. An-other large cluster that has not been published but has Accepted for publication August 5, 2005.
been investigated by the Centers for Disease Control and Authors are members of the American Society of Cataract and Prevention (CDCP) occurred in a surgery center in Georgia Refractive Surgery Cornea Clinical Committee.
and involved 24 patients presumed to be infected with No author has a proprietary or financial interest in any material or Mycobacterium gordonaeKarp et al.report a series of sporadic cases of atypical mycobacteria. Based on their 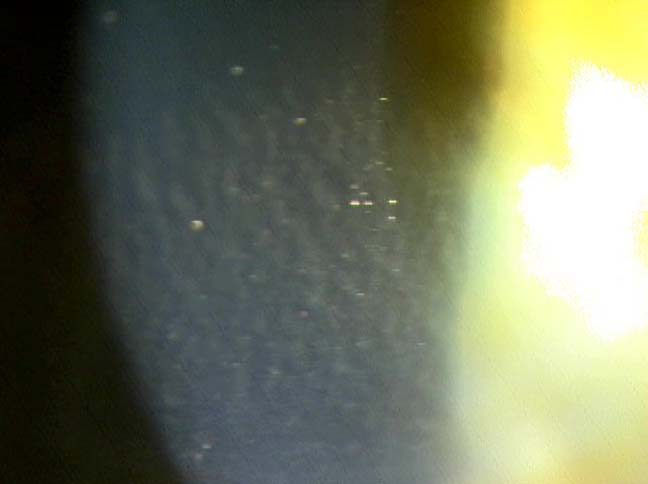