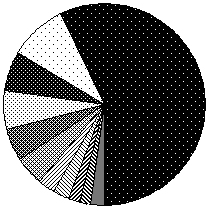 In this issue:
Serious reactions generally…
▼ Fluoroquinolones and tendon disorders
▼ Serious reactions generally…
Adverse drug reactions (ADRs) are a major problem, both in ▼ …and serious reactions with NSAIDs
hospital and in the community. However, it is estimated that only about 10% of serious reactions are reported.4 The ▼ Drug interactions causing ADRs
CSM asks that all serious ADRs are reported, even if the
▼ Diuretics - a leading cause of ADR-
reaction is well recognised and occurs with an established related hospitalisation in the elderly
drug. Guidance for assessing whether or not a reaction is serious is printed on Yellow Cards and is summarised below: Fluoroquinolones and tendon
disorders
Tendon disorders are a rare but well recognised class effect of the fluoroquinolone antibiotics. The mechanism for this • involve or prolong inpatient hospitalisation reaction is not clear, although the sudden onset of some • involve persistent or significant disability or tendinopathies after a single dose suggests a direct effect on collagen fibres. In other cases, however, the reaction occurs months after the therapy is discontinued. Tendinitis usually resolves in around three weeks, but can persist for • are otherwise medically significant in your longer, while tendon rupture may take between one and six months to heal.1 The CSM advises that fluoroquinolones are contraindicated in patients with a history of tendon disorders related to their use and should be discontinued … and serious reactions with
The risk of tendon disorders appears to be higher in the The serious reactions occurring with each non-steroidal elderly and in those on long-term steroid therapy. A recent anti-inflammatory drug (NSAID) are documented in its analysis of a large UK General Practice Research database identified 704 cases of Achilles tendinitis and 38 cases of Summary of Product Characteristics (SPC). CSM Mersey has received 894 Yellow Cards for NSAIDs, including COX- Achilles tendon rupture among a cohort of 46,776 patients 2 inhibitors and aspirin, 65% of which describe serious who had used fluoroquinolones over a six-year period.2 The suspected reactions. Most of the Yellow Cards for aspirin relative risk for all tendon disorders with current use was 3.2 report gastrointestinal (GI) ulceration and bleeding (161 out among patients aged 60 years or older and 0.9 among of a total of 199 reports), with a further 153 reports of GI patients aged under 60 years. The risk was increased to 6.2 bleeding for the other NSAIDs. The following chart splits the in patients over 60 years who were also taking serious reported reactions to NSAIDs according to reaction The likelihood of inducing tendon lesions varies amongst the fluoroquinolones. Levofloxacin and ofloxacin may be Serious NSAID reports by reaction class
more likely to do so than ciprofloxacin, norfloxacin and nalidixic acid, possibly due to differences in their chemical structures.3 CSM Mersey has received 134 Yellow Cards reporting suspected adverse reactions to fluoroquinolones, including 23 reports for tendon disorders. More than half of these reactions occurred in the first 48 hours of treatment. The CSM Mersey reports are illustrated in the following table: Tendinitis and Achilles tendon rupture are
serious reactions and should be reported to
the CSM via the Yellow Card Scheme.
A bulletin for prescribers discussing adverse drug reactions reported to the Mersey CSM regional monitoring centre. Published in conjunction with the University of Liverpool Department of Clinical Pharmacology. Editor: Helen Dingle. Telephone 0151 794 8122. E-mail [email protected] CSM Mersey, Freepost, Liverpool, L3 3AB

Drug interactions causing ADRs
or renal insufficiency due to increasing age may have been contributing factors. Co-prescription of drugs can be beneficial, such as the use 148 (59%) Yellow Cards reported metabolic disorders, of ACE inhibitors and diuretics in order to obtain an additive including electrolyte disturbances and dehydration. effect, or they can be harmful, either by reducing the Frusemide and thiazide diuretics can be responsible for effectiveness of a drug or by increasing its toxicity. hyponatraemia, either alone or in combination with Undesirable interactions are classified as serious ADRs and potassium-sparing diuretics. Potassium-sparing diuretics can also cause hyperkalaemia, particularly in the elderly. Drug interactions are a significant cause of hospitalisation, Patients with diabetes or renal dysfunction and those taking particularly in the elderly, who may be taking a number of potassium supplements, ACE inhibitors, angiotensin-II different drugs. A recent study found that 26% of ADRs receptor antagonists or using salt substitutes are also at causing hospital admission were due to a drug-drug risk. Regular monitoring of potassium is essential in these patients. Hypokalaemia may be induced by both thiazide and loop diuretics and is a particular problem in patients Drug interactions can be divided into two classes, with heart failure or who are also taking digoxin. Two Yellow pharmacokinetic and pharmacodynamic. Pharmacokinetic Cards reporting hypokalaemia stated that the patient was interactions affect the absorption, distribution, metabolism taking a diuretic plus digoxin. Combination diuretic therapy, and excretion of drugs. They are not easily predicted and or the use of high-dose diuretics may cause over-diuresis may only affect a small proportion of patients. Pharmacodynamic interactions occur between drugs acting on the same physiological system, or may be due to A further 69 reports (28%) reported renal disorders competition at receptor sites. These may occur in the including renal impairment, acute renal failure and interstitial majority of patients receiving the drugs. For example, using nephritis. Diuretics are a major cause of drug induced benzodiazepines and sedating antihistamines together can interstitial nephritis, a problem that is more likely to occur in cause excessive sedation (an additive interaction). patients with pre-existing glomerular disease. Interstitial nephritis may present with non-oliguric acute renal failure Details of interactions are readily available in section 4.5 of and sometimes pyrexia and eosinophilia 4 to 10 weeks after the SPC for each drug, available from a link at diuretic therapy is started. Recovery is usually BNF. For more detailed descriptions, Stockley’s Drug The number of diuretic reports, including those in which Interactions is a good source of information. more than one drug was suspected, on the CSM Mersey Drug interactions with warfarin can be serious. CSM Mersey has received 154 Yellow Cards reporting increased INR and bleeding disorders with warfarin as one of the suspected drugs. In many of these cases, warfarin interacted with one or more drugs the patient was taking concurrently. Drugs reported to CSM Mersey as possible interactions with ▼ Antibiotics and antifungals (19 reports) Serious reactions associated with diuretics
often result in hospitalisation. Please
continue to report these reactions.
More data are needed on drug interactions,
even if they are well established and you
consider them to be preventable. Please
The CSM always acknowledges reports made on Yellow report all suspected interactions on a Yellow
Cards whether the route is by post, via the GP prescribing system or via the electronic Yellow Card. The acknowledgement will include the report’s individual Diuretics – a leading cause of ADR- registration number.
Do you always receive an acknowledgement? If not, then related hospitalisation in the elderly
your report may not have reached the CSM. Contact us if you think that we have not received a report. Diuretics are a major cause of ADR-related hospital admission, according to a recent review.6 The review quotes a Dutch study from 1994 in which 56% of 105 elderly patients admitted to hospital were taking a diuretic. 19 of 36 REFERENCES
patients who were taking frusemide suffered an ADR, 1. Davies’s Textbook of Adverse Drug Reactions. Fifth Edition (1998) usually in the form of dehydration or electrolyte disturbances. Overall, diuretics were ranked between 2. van der Linden PD et al. Fluoroquinolones and risk of Achilles tendon disorders: Case-control study second and fifth as causes of ADRs leading to BMJ 2002; 324: 1306-1307
3. Meyler’s Side Effects of Drugs. Fourteenth Edition (2000) p.854 &
4. Pirmohamed M et al. Adverse drug reactions. BMJ 1998; 316:
Since 1989, CSM Mersey has received 251 Yel ow Cards 1295-1298
reporting ADRs to diuretics. Of these, 213 (85%) occurred 5. McDonnell PJ et al. Hospital admissions resulting from in persons aged 65 and older and 237 (94%) were classified preventable adverse drug reactions. Ann Pharmacother 2002;
as serious, with 208 of these reports being collected last 36(9): 1331-1336
year on hospital medical admissions wards. In most reports, the patient was on multiple drug therapy; drug interactions 2002 www.jr2.ox.ac.uk/bandolier/Extraforbando/ADRPM.pdf