Biodiversity
The banks of the Jordan River and the Dead Sea Side Wadis, the marshes around the springs and the land depressions adorn the bare and desolate surroundings with evergreen meandering strips and Oasis. Soil moisture in these areas from springs, runoff or underground moisture compensate for the scantiness of atmospheric creating microhabitats booming with life forms. 1458 vascular plant species, 29 bats species, were recorded in the study area. In Wadi Mujib alone, 412 plant species, 40-50 aquatic invertebrates, 24 mammals, 3 amphibian, 150 birds, 21 reptile and 3 fish species have been recorded. Many of the plants in Wadi Mujib were recorded for the first time in Jordan; these are Kickxia judaica, Ophioglosum polyphyllum , Withania obtusifolia, Polygomum argyrocoleum. Halophytic vegetation is common in the Dead Sea Basin. The banks of the Jordan River and the tributaries pouring into the Jordan River and the Dead Sea were populated by Populion Euphraticae and Tamaricetum Jordanis alliances that formed dense and even impenetrable woods. They adorn the bare and desolate surroundings with an evergreen meandering strip. Populus occupied the frontal part of the bank while Tamarix jordanis was situated behind it. In the shade of these trees –Zohari described (1962) - one often encounters several species including Lycium europaeum, Atriplix halimus, Asparagus palaestinus, and others. These plants can tolerate fairly high soluble salt contents, which used to accumulate in summer on the dried up river sides. Around the Jordan River Banks, in the Lower Jordan River Valley and around the Dead Sea, Zohari (1962) described the plant life to be inhabited by halophytic vegetation occurring in confluence with brackish springs and high water table salines. These Marshes are abundant in the Dead Sea region in areas like Ein-Fashkha. The vegetation in these areas belongs to the Suaedetea Deserti Class mainly formed of the Junco-Phragmition alliance, the Tamaricion Tetragynae alliance, Atriplico-Suaedion Palaestinae alliance and the Salsolion Villosae alliance. The Junco-Phragmition alliance vegetation is found in permanently open water bodies of brackish water. The Tamaricion Tetragynae alliance vegetation is found in areas inundated during winter. The Atriplico-Suaedion alliance vegetation is mesohalophytic and found in areas where groundwater tables are close to the surface. Finally, the Salsolion Villosae alliance vegetation is found in dry areas forming the outermost belt of all halophytic vegetation and can be classified as xerohalophytes. The Junco-Phragmition alliance vegetation is mainly Reed and Rush vegetation. The Suaedetum Forskalii occupies broad belts along the Banks of the Jordan River at the Back of Tamarix jordanis and on the elevated foreshore of the Dead Sea. The Salsolion Villosae alliance vegetation is mostly dwarf shrubs with Kc values of 0.25 or less. Further from the coastal areas of the Dead Sea are the Saharo-Sindian hammada deserts of Transjordan (Zohari, 1962) consisting mainly of the following plant alliances: Anabasidion Articulatae, Zygophyllion Dumosi, Chenoleion Arabicae and Suaedion Asphalticae. The former belongs to the Anabasidion Articulatae order and the others belong to the Zygophyllion Dumosi order. The Zygophylletum persists only in the low lands where the scantiness of atmospheric moisture is compensated for by runoff or underground moisture. The order comprises of winter annuals which appear only in rainy season. The perennials are mainly succulent chamaephytes 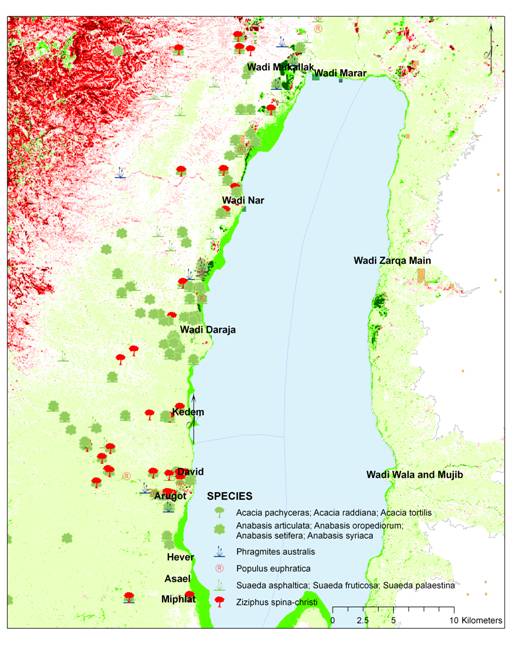 which replace their larger winter leaves by minute summer leaves which reduce transpiration by 87%. The two communities of Suaedetum Asphalticae and Chenoleetum Arabicae accompany Zygophylletum. These are mainly dwarf shrubs with small succulent leaves, shallow root systems, and high osmotic values. The Anabasidetum Articulatae Typicum species are confined to Wadis, runnels, and depressions. Moisture conditions in these sites are more favorable for a richer flora and the salts are leached. The species are annuals, Tamarix or Acacia trees and Retama bushes. The tropical vegetation in the Lower Jordan valley and in the Arava valley are relics of a Tertiary tropical flora which after the decline of Pliocene, took refuge mainly in the lower Jordan and the Arava Valleys occurring in the outlets of permanent and ephemeral watercourses (tropical oasis) such as in Ein Gedi, Jericho, Wadi Farah, etc. The most common trees are Acacia spp.; Zizyphus spina-christi among others. The distribution of some Hydrophilic, Halophytic and tropical plant specis in the Western Side of the Dead Sea is shown in Map 1. Map 1 :The distribution of some Halophytic, Tropical and Hydrophilic species
in the Dead Sea Basin 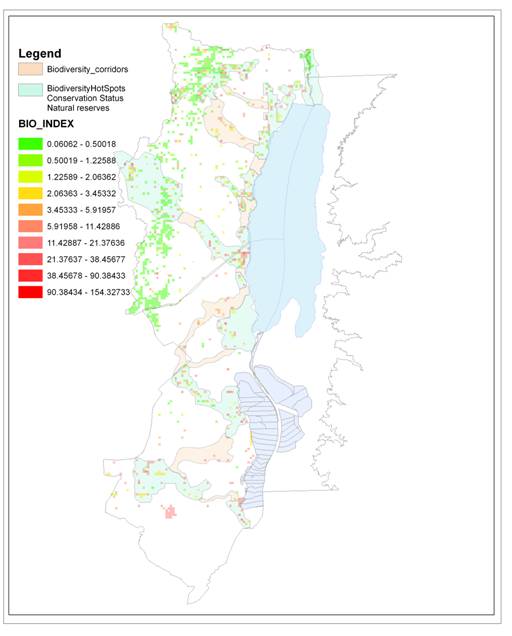 In order to gain a better understanding of the distribution of plant and animal life in the Dead Sea Basin, biodiversity records were plotted on a map. Wadis, runnels, marshes and Oasis in the Dead Sea Basin had higher records of biodiversity than the surrounding arid areas. These areas were considered for the purposes of this study as biodiversity important areas and the corridors linking these areas to the Mediterranean biome were considered biodiversity corridors. In these areas, it is proposed that specific measures should be taken to conserve the habitats and protect the biodiversity (Map 2). Map 2 Biodiversity Index map, biodiversity hotspots and biodiversity corridors
Satellite images were used in order to assess changes in above ground green biomass as an indicator of landscape degradation in the Biodiversity important areas and biodiversity corridors. Areas with significant loss of above ground green biomass and the main underlying causes of the loss are the following: i. Wadi Al-Auja: the discharge of Al-Auja spring was completely diverted to agricultural use. This coupled with overgrazing has led to very sharp losses in biomass and destruction of natural vegetation. ii. Grazing areas in the north western part of the Basin: Grazing by some 240,000 small ruminants in that area has led to land the loss of annual herbs and their replacement by dwarf spiny shrubs. iii. The Jordan River Bed and Banks: The ecosystem of the Jordan River was reduced from a healthy association of Euphraticae and Tamaricetum Jordanis alliances to a degraded ecosystem with short shrubs. The diversion of some 1,250 MCM/yr of good quality water from the Jordan River was the main reason for the degradation of the ecosystem. iv. Wadi Nar: Pollution of Wadi Nar with more than 10 MCM of untreated wastewater is the main reason of the degradation observed in Wadi Nar. v. The marshes of Ein-Fashkha and Ghwair-Turba: The main reason of degradation is the retreat of the Dead Sea shores and the declining water level. While vegetation is spreading eastwards as more land is drying up, the vegetation forming the Western belt of the marshes is degrading. vi. Major Wadis: All major Wadis with anthropogenic impacts of either overgrazing or diversion of water resources are suffering differing levels of biomass loss with the exception of Wadi Mujib where the construction of the Dam did not have an adverse impact of biomass. However, the same cannot be told of biodiversity as there is a serious lack of records of changes in biodiversity available to the project team.

MEDICATIONS, VITAMINS AND SUPPLEMENTS TO AVOID Your safety in surgery requires that you disclose all medications, vitamins and supplements that you regularly take. In the days prior to surgery, you will be required to stop taking certain medications, vitamins and supplements, both those you regularly take, and those that may be taken incidentally for pain or other symptoms. Please notify o