Highly enantioselective epoxidation of 2,4-diarylenones by using dimeric cinchona phase-transfer catalysts: enhancement of enantioselectivity by surfactants this research was supported by a grant (r01-2002-000-0005-0) from the basic research program of the kosef (2004). 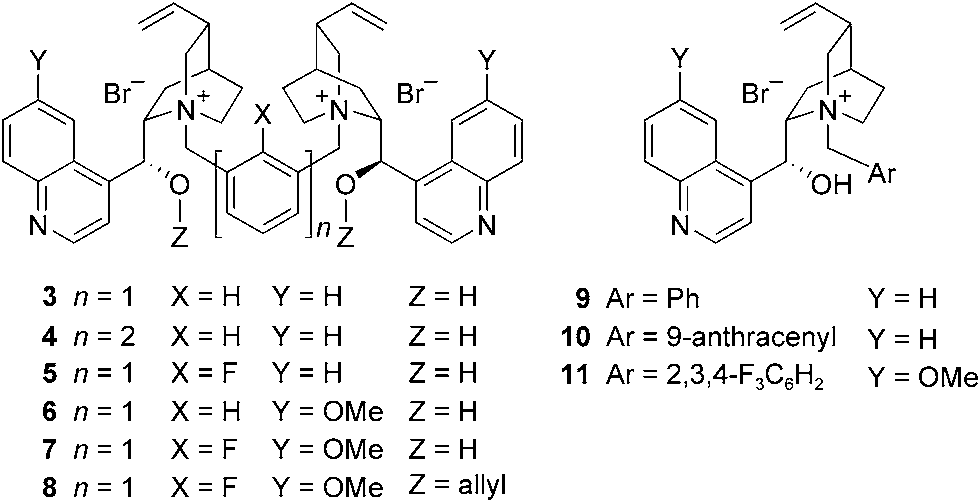 Angewandte
Chemie
Highly Enantioselective Epoxidation of 2,4-Diarylenones by Using Dimeric Cinchona Phase-Transfer Catalysts: Enhancement ofEnantioselectivity by Surfactants** Sang-sup Jew,* Jeong-Hee Lee, Byeong-Seon Jeong,Mi-Sook Yoo, Mi-Jeong Kim, Yeon-Ju Lee, Jihye Lee,Sea-hoon Choi, Kyungjae Lee, Myoung Soo Lah, andHyeung-geun Park* and 50 % aqueous KOH (3 equiv) in diisopropyl ether at Since the asymmetric epoxidation of allylic alcohols, which 10 8C. As shown in Table 1, although the reaction time was was reported by the Sharpless group in 1980, catalytic somewhat long (48 h), the dimeric catalyst 3 showed moder- asymmetric epoxidation has been one of the most important ate enantioselectivity (48 % ee) compared with the corre- asymmetric methodologies.[1] A number of methods have sponding monomeric catalyst 9, which provided virtually no been developed for the epoxidation of both unfunctionalized enantioselectivity (Table 1, entries 1 and 8). Before we olefins and electron-deficient enones.[2] Quite recently, cata- searched for an optimal catalyst for the epoxidation, we lytic asymmetric phase-transfer epoxidations by using a needed to reduce the long reaction time, which might cause cinchona alkaloid-derived quaternary ammonium salt as a the low enantioselectivity through non-PTC-mediated epox- chiral phase-transfer catalyst (PTC) have been reported by several research groups.[3] Despite their practical potential,several shortcomings, such as insufficient enantioselectivity, Table 1: Catalytic enantioselective epoxidation of trans-chalcone.
long reaction times, and low reaction temperatures, stillremain. Herein we report a highly enantioselective andpractical catalytic epoxidation of enones by using cinchonaalkaloid-derived dimeric quaternary ammonium salts and therole of surfactants for enantioselectivity.
Recently, we reported a series of novel meta-dimeric catalysts, derived from cinchona alkaloids, which were successfully applied in the enantioselective synthesis of a- amino acids.[4] As part of our research, we attempted to apply these catalysts to the asymmetric epoxidation of 2,4-diary- lenones. As very versatile intermediates,[3b] the epoxides of 2,4-diarylenones have been applied to the synthesis of various biologically active compounds such as naproxen, ibuprofen, diltiazem, the side chain of Taxol, (+)-clausenamide, as well as styryl lactones ((+)-goniotriol and (+)-goniofufurone).[5] We first performed the enantioselective phase-transfer [a] Enantiopurity was determined by HPLC analysis with a chiral column epoxidation of trans-chalcone (1 a) by using 5 mol % of the (DAICEL Chiralpak AD), and absolute configuration was determined by dimeric catalyst 3 along with 30 % aqueous H comparison of the HPLC retention time with reported data.[3] Recently, Okino and Takemoto reported a phase-transfer [*] Prof. Dr. S.-s. Jew, J.-H. Lee, Dr. B.-S. Jeong, M.-S. Yoo, M.-J. Kim, alkylation in a nonorganic solvent as a green chemical Y.-J. Lee, J. Lee, S.-h. Choi, Prof. Dr. H.-g. Park process;[6] the method involved the use of a surfactant, Research Institute of Pharmaceutical Sciences and Triton X-100. As surfactants generally increase the surface College of PharmacySeoul National University area between the two phases by the formation of micelles,[7] we expected that the reaction would be accelerated in the presence of surfactants. Thus, we tentatively tried Triton X- 100 in a phase-transfer epoxidation. Surprisingly, the use of just 5 mol % of Triton X-100 dramatically increased not only the rate of the reaction (five times) but also the enantiose- Department of Chemistry and Applied Chemistry lectivity (82 % ee, Table 1, entry 2). Generally, when the nucleophile and electrophile were not in the same phase, the phase-transfer reaction was considerably slower than the [**] This research was supported by a grant (R01-2002-000-0005-0) from the Basic Research Program of the KOSEF (2004).
reaction that occurred when both components were in the Supporting information for this article is available on the WWW organic phase. In the case of such a slow enantioselective under http://www.angewandte.org or from the author.
phase-transfer reaction, the low enantioselectivities may not Angew. Chem. Int. Ed. 2005, 44, 1383 –1385  2005 Wiley-VCH Verlag GmbH & Co. KGaA, Weinheim

always reflect the low catalytic efficiencies of the employed Table 2: Optimization of surfactants.
catalysts. The low reaction rates might not allow the catalysts toperform optimally. Therefore, surfactants might effectivelyincrease enantioselectivity, thus allowing an accurate evaluationof the catalyst capacity in phase-transfer catalytic reactions.
Once we had decreased the reaction time, we continued our search for an optimal catalyst. Five new dimeric catalysts(4–8) along with three monomeric catalysts (9–11) were prepared,[8] and their catalytic efficiencies for epoxidation were evaluated in the presence of 5 mol % of Triton X-100. As shown in Table 1, the catalyst based on the naphthyl ligand, 4, displayed almost no enantioselectivity (Table 1, entry 3), which suggests that the length of the spacer between the two cinchona units influences the binding of the catalyst with [a] The surfactants were purchased from Aldrich Co Ltd. 1 mol % was chalcone (1 a) and peroxide. In a series of meta-dimeric catalysts based on a central phenyl ring, introduction ofsubstituents in 5 (X = F; entry 4, 92 % ee) and 6 (Y = OMe;entry 5, 92 % ee) had an equal effect on the enantioselectivity.
Table 3: Enantioselective phase-transfer catalytic epoxidation of enones.
These favorable effects were confirmed by an additionalincrease in enantioselectivity in the case of catalyst 7 (X = F,Y = OMe; entry 6, 98 % ee). Despite the presence of the F andOMe functional groups in the appropriate positions, use ofthe corresponding O(9)-allyl catalyst 8 led to lower enantio- selectivity (entry 7, 6 % ee), which implies that the free OH group on C9 is essential for the binding process. With the monomeric catalysts (9–11), neither the surfactant effect nor the effect of the functional groups was observed (Table 1, entries 9–11). These accumulated findings suggested that the ortho F group on the phenyl ring, the 6’-methoxy group on the quinoline moiety, and the free OH group on C9 in catalyst 7 play integral roles in the favorable conformation of the binding intermediate, which comprises 7, 1 a, and the hydro-gen peroxide anion.
Next, we focused our attention on finding an optimal plausible transition state of the catalytic asymmetric epox- surfactant. Five commercially available surfactants were idation (Figure 2). The chalcone is located between the two chosen. The epoxidation of 1 a was performed by using cinchona units in 7. The b-phenyl group of chalcone has a p–p 1 mol % of 7 along with 30 % aqueous H2O2 (10 equiv), 50 % stacking interaction with one of the quinoline moieties. The aqueous KOH (2.0 equiv), and the surfactants in diisopropyl carbonyl oxygen atom is placed as close to the N+ center as ether at room temperature. Among the surfactants (Table 2, permitted by van der Waals forces. The other N+ center is ion- entries 1–5), Span 20 gave the best results in terms of both paired with the hydrogen peroxide ion through hydrogen yield (95 %) and enantioselectivity (> 99 %). The enantiose- bonding with the oxygen of 6’-methoxy group in quinoline. As lectivity was preserved even when only a stoichiometric a consequence, hydrogen peroxide can only approach the amount of KOH was present (entry 6), but a decrease in the b carbon atom of chalcone from the upside in the 1,4-addition initial amount of H2O2 used resulted in a slight decrease in to afford the aS,bR isomer 2, which is in agreement with the Under the optimal reaction conditions (as in Table 2, In conclusion, we have demonstrated that surfactants can entry 6), the reaction of various 2,4-diarylenones with hydro- dramatically increase both the reaction rate and enantiose- gen peroxide in the presence of 7 wasinvestigated (Table 3). High enantiose-lectivities (97 to 99 % ee) were observedfor a variety of 2,4-diarylenones, whichindicate that the reaction is a veryefficient enantioselective method forthis epoxidation. However, aliphatic-substituted substrates exhibited rela-tively low enantioselectivities (data notshown).
Figure 1. Stereoview of the X-ray crystal structure of 7-PF6.
 2005 Wiley-VCH Verlag GmbH & Co. KGaA, Weinheim Angew. Chem. Int. Ed. 2005, 44, 1383 –1385