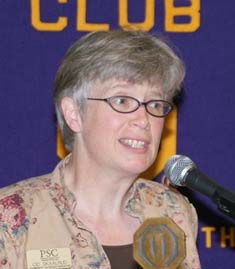 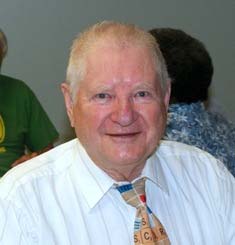 Attendance/Guests:
Our Speaker Last Week:
Total attendance last week was 34: 32 Optimists and 2 guests; Jerry Larson, guest Cindy (Cid) Skaalrud, Ma spoke to our Club about Parkinson’s
disease. Parkinson’s disease is a neurological disease that
of Doug Waller and Dick Hughes, guest of Jay Hermann. Singing was led by Robert leads to a lack of the brain chemical called dopamine Its pro- Von Kruppstad and it was lively, indeed! gression is typically slow and progressive over many years. One in 100 of us are likely to get it. Most people will get it if they live Good Things/Positive Things:
long enough. Although there is not a “test” for diagnosing Park-inson’s Disease there are 4 symptoms of the disease as follows:  Steve Lindgren reported that Steve Sutter was vacationing in Alaska and
stopped and visited Joe Carlson’s son and family in Joy, Alaska. This hap- pened the day after we experienced a heat index of 118 and in the same week  Rigidity (resistance to passive motion. Stiffness, ratchet like that Moorhead suffered a heat index of 134 and was reported to be the hottest place in the WHOLE WORLD. You know how to pick ‘em, Steve.  Akinesia =lack of movement; Bradykinesia =slowness of movement; and,  Mike Karnas presented a half gallon of soap suds to Mike McCawley to take
 Hypokinesia=smallness of movement.  Increase of falling because standing with a poor base/feet close together. Other important things to know about Parkinson’s disease are: Halucinataions, pain and slower mental processing progressing to some Alzheimer's. There are very few medications that are helpful but commonly SINEMET prescribed for increasing movement and function but then leaves the body quickly , leaving the person with increased symptoms sometimes referred to as being “on” and Cid pointed out ways one can help a friend or family member with Parkinson’s Dis- ease. MINIMIZE DISTRACTIONS, reduce background noise, give simple choices (avoid excessive explanations). Learn to WAIT-ask a question once and then wait for an answer. Try to wait until the patient is done with a task at hand, avoid interrupting what they area doing. UNDERSTAND. Remember they are still the same person inside although they may not show it on the outside. ACCOMMODATE. Be flexible to engage during “on” times and have rest at “off” times will make your contact more  Arnie Odefey won one of two tickets from U.S. Bank in a drawing and received
meaningful. COMPASSIONATE. If they do something out of character remember it is a tour of vintage airplanes including a B 17 Bomber in which he had a ride. part of the disease. OFFER ASSISTANCE. If you think someone needs your help, Tickets were $425 each if you didn’t have a ticket.  Fritz Herring stopped to see Dick and Delores Youngquist and reported that
Cid passed out some helpful references and a Wellness Wheel to help restore balance Delores celebrated her 80th birthday the day he was there. in your life. She currently has a Home Healthcare business for taking care of Parkin- son’s patients in four group homes located in community unidentified homes. It is Announcement/Committee News:
 Leif Holter Hole-in-One Contest to be held at Lyndale field on July 29, 30 and
31. Turn in your sales proceeds from the pre-sale of tickets and hole sponsor- Birthdays/Anniversaries:
ships today if possible. Food and refreshments will be available, air toys are  Bob & Carol Houlton celebrated
available for the kids and Roy says there will be a surprise or two also. The their 50th anniversary and Arnie &
Junior Optimists and Minnesota Life students are helping but Roy can always Jean Odefey celebrated their anni-
use some ball shaggers and prize hand out supervision. Thanks for those who  Can Day: Bring your aluminum cans to the meeting on August 3. Anybody will-
by Fritz Herring who complimented the 4 singers who  The DMM 4th quarter convention will be held in Bismarck, N.D. on August 18-
20. Any club member may attend. See Arnie Odefey if you are interested or go to the website <www.optimist-dmm.org> for additional information.  Fritz Herring celebrated his 83rd birthday with the same
chorus singing “Happy Birthday” and stayed on key sans Fritz’s leadership. Go figure! 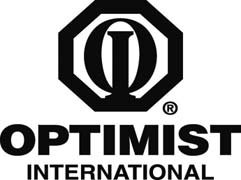 Promise yourself ….
To be so strong that nothing can disturb
your peace of mind.
To talk health, happiness and prosperity
Lyall Schwartzkopf
To make all your friends feel that there
is something in them.
To look at the sunny side of everything
To think only of the best, work only for the best,
and expect only the best.
To be just as enthusiastic about the success
of others as you are about your own.
To forget the mistakes of the past and press on
to the greater achievements of the future.
To wear a cheerful countenance at all times
and give every living creature you meet a smile.
To give so much time to the improvement of
yourself that you have no time to criticize others.
To be too large for worry, too noble for anger, too strong
for fear, and too happy to permit the presence of trouble.