Aldactone®
ALDACTONE has been shown to be a tumorigen in chronic toxicity studies in rats (see Precautions). ALDACTONE should be used only in those conditions described under Indications and Usage. Unnecessary use of this drug should be avoided.
DESCRIPTION
ALDACTONE oral tablets contain 25 mg, 50 mg, or 100 mg of the aldosterone antagonist spironolactone, 17-hydroxy-7α-mercapto-3-oxo-17α-pregn-4-ene-21-carboxylic acid γ-lactone acetate, which has the following structural formula: Spironolactone is practically insoluble in water, soluble in alcohol, and freely soluble in benzene and in chloroform.
Inactive ingredients include calcium sulfate, corn starch, flavor, hypromellose, iron oxide, magnesium stearate, polyethylene glycol, povidone, and titanium dioxide.
ACTIONS / CLINICAL PHARMACOLOGY
Mechanism of action: ALDACTONE (spironolactone) is a specific pharmacologic antagonist of aldosterone, acting primarily through competitive binding of receptors at the aldosterone-dependent sodium-potassium exchange site in the distal convoluted renal tubule. ALDACTONE causes increased amounts of sodium and water to be excreted,while potassium is retained. ALDACTONE acts both as a diuretic and as an antihypertensive drug by this mechanism. It may be given alone or with other diuretic agents that act more proximally in the renal tubule.
Aldosterone antagonist activity: Increased levels of the mineralocorticoid, aldosterone, are present in primary and secondary hyperaldosteronism. Edematous states in which secondary aldosteronism is usually involved include congestive heart failure, hepatic cirrhosis, and nephrotic syndrome. By competing with aldosterone for receptor sites, ALDACTONE provides effective therapy for the edema and ascites in those conditions. ALDACTONE counteracts secondary aldosteronism induced by the volume depletion and associated sodium loss caused by active diuretic therapy.
ALDACTONE is effective in lowering the systolic and diastolic blood pressure in patients with primary hyperaldosteronism. It is also effective in most cases of essential hypertension, despite the fact that aldosterone secretion may be within normal limits in benign essential hypertension.
Through its action in antagonizing the effect of aldosterone, ALDACTONE inhibits the exchange of sodium for potassium in the distal renal tubule and helps to prevent potassium loss.
ALDACTONE has not been demonstrated to elevate serum uric acid, to precipitate gout, or to alter carbohydrate metabolism.
Pharmacokinetics: ALDACTONE is rapidly and extensively metabolized. Sulfur-containing products are the predominant metabolites and are thought to be primarily responsible, together with ALDACTONE, for the therapeutic effects of the drug. The following pharmacokinetic data were obtained from 12 healthy volunteers following the administration of 100 mg of spironolactone (ALDACTONE film-coated tablets) daily for 15 days. On the 15th day, spironolactone was given immediately after a low-fat breakfast and blood was drawn thereafter.
Accumulation
AUC (0-24 hr,
Mean Peak
Mean (SD)
day 15)/AUC
Post Steady-
(0-24 hr, day 1)
Concentration
State Half-Life
The pharmacological activity of spironolactone metabolites in man is not known. However, in the adrenalectomized rat the antimineralocorticoid activities of the metabolites C, TMS, and HTMS, relative to spironolactone were 1.10, 1.28, and 0.32, respectively. Relative to spironolactone, their binding affinities to the aldosterone receptors in rat kidney slices were 0.19, 0.86, and 0.06, respectively.
In humans, the potencies of TMS and 7-α-thiospirolactone in reversing the effects of the synthetic mineralocorticoid, fludrocortisone, on urinary electrolyte composition were 0.33 and 0.26, respectively, relative to spironolactone. However, since the serum concentrations of these steroids were not determined, their incomplete absorption and/or first-pass metabolism could not be ruled out as a reason for their reduced in vivo activities.
Spironolactone and its metabolites are more than 90% bound to plasma proteins. The metabolites are excreted primarily in the urine and secondarily in bile.
The effect of food on spironolactone absorption (two 100 mg ALDACTONE tablets) was assessed in a single-dose study of 9 healthy, drug-free volunteers. Food increased the bioavailability of unmetabolized spironolactone by almost 100%. The clinical importance of this finding is not known.
CLINICAL STUDIES
Severe heart failure: The Randomized Aldactone Evaluation Study (RALES) was a multinational, double-blind study in patients with an ejection fraction of ≤ 35%, a history of New York Heart Association (NYHA) class IV heart failure within 6 months, and class III – IV heart failure at the time of randomization. All patients were required to be taking a loop diuretic and, if tolerated, an ACE inhibitor. Patients with a baseline serum creatinine of >2.5 mg/dL or a recent increase of 25% or with a baseline serum potassium of >5.0 mEq/L were excluded.
Patients were randomized 1:1 to spironolactone 25 mg orally once daily or matching placebo. Follow-up visits and laboratory measurements (including serum potassium and creatinine) were performed every four weeks for the first 12 weeks, then every 3 months for the first year, and then every 6 months thereafter. Dosing could be withheld for serious hyperkalemia or if the serum creatinine increased to >4.0 mg/dL. Patients who were intolerant of the initial dosage regimen had their dose decreased to one tablet every other day at one to four weeks. Patients who were tolerant of one tablet daily at 8 weeks may have had their dose increased to two tablets daily at the discretion of theinvestigator.
RALES enrolled 1663 patients (3% U.S.) at 195 centers in 15 countries between March 24, 1995 and December 31, 1996. The study population was primarily white (87%, with 7% black, 2% Asian, and 4% other), male (73%), and elderly (median age 67). The median ejection fraction was 0.26. Seventy percent were NYHA class III and 29% class IV. The presumed etiology of heart failure was ischemic in 55%, and non-ischemic in 45%. There was a history of myocardial infarction in 28%, of hypertension in 24%, and of diabetes in 22%. The median baseline serum creatinine was 1.2 mg/dL and the median baseline creatinine clearance was 57 mL/min. The mean daily dose at study end for the patients randomized to spironolactone was 26 mg. Concomitant medications included a loop diuretic in 100% of patients and an ACE inhibitor in 97%. Other medications used at any time during the study included digoxin (78%), anticoagulants (58%), aspirin (43%), and beta-blockers (15%).
The primary endpoint for RALES was time to all-cause mortality. RALES was terminated early, after a mean follow-up of 24 months, because of significant mortality benefit detected on a planned interim analysis. The survival curves by treatment group are shown in Figure 1. 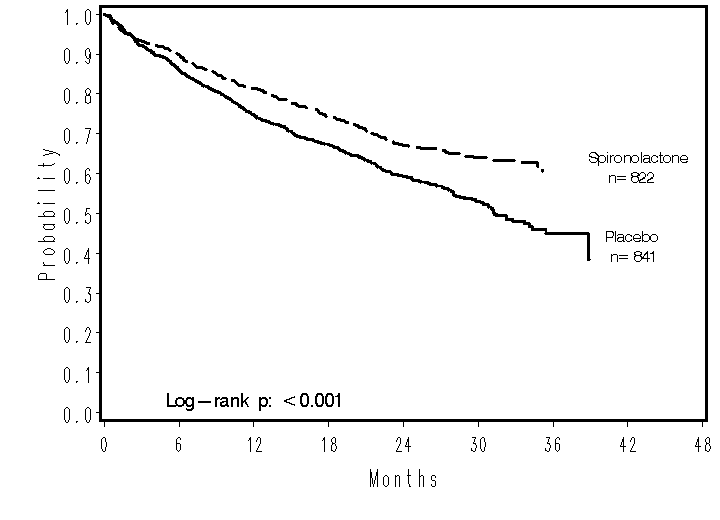 NDC Number
ALDACTONE 100 mg tablets are round, peach-colored, scored, film-coated, with SEARLE and 1031 debossed on the scored side and ALDACTONE and 100 on the other side, supplied as: NDC Number