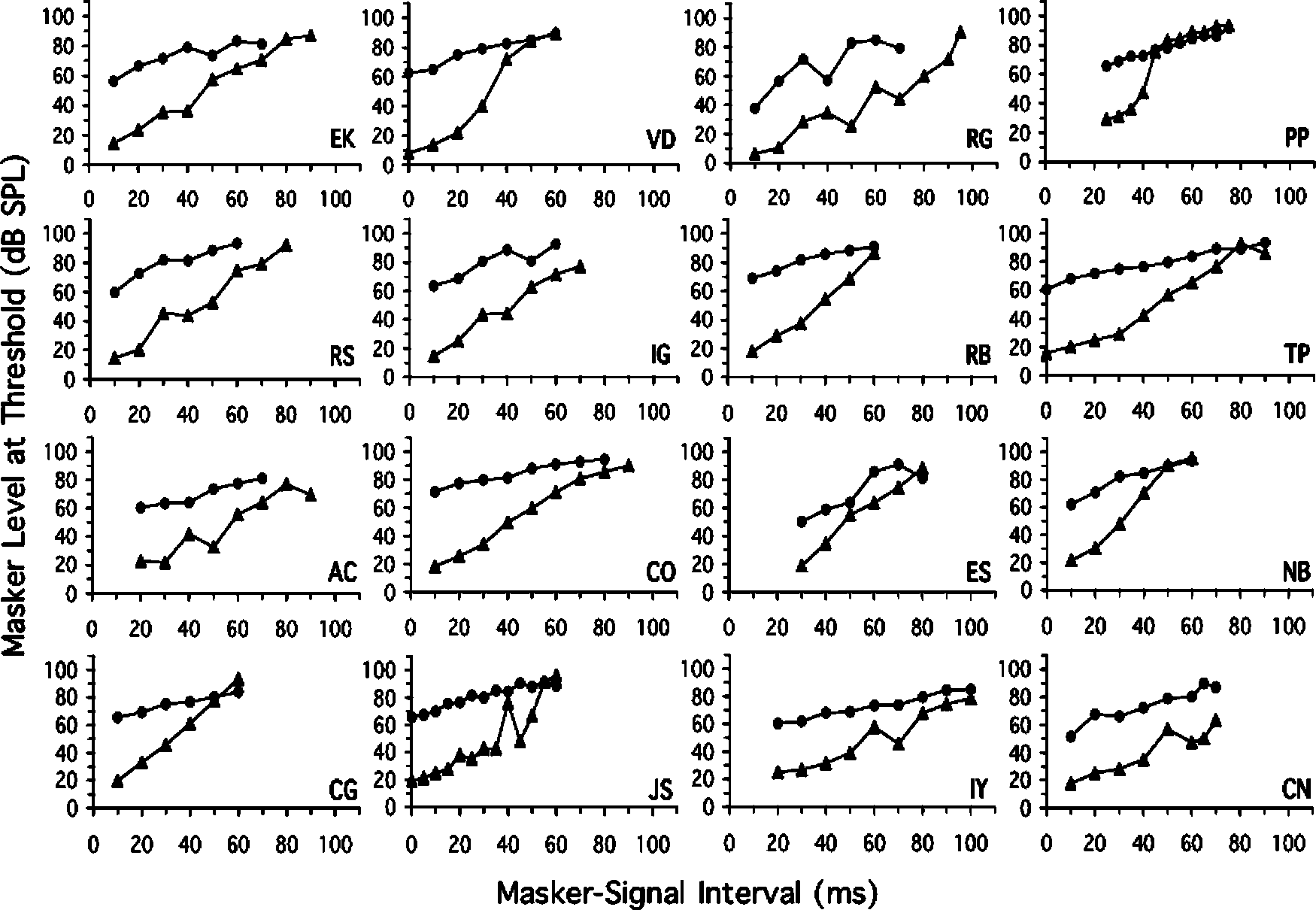 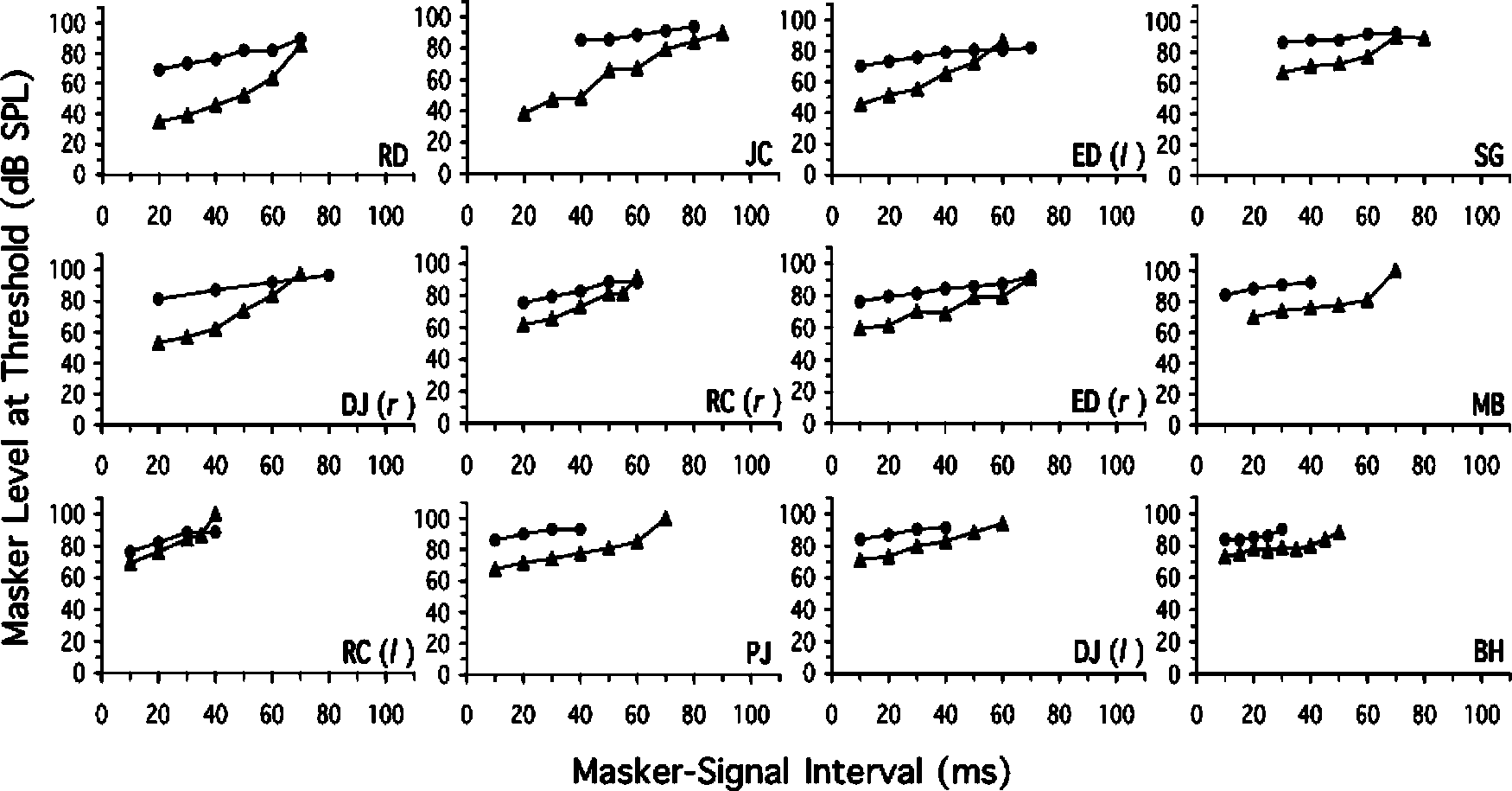 FIG. 1. TMCs for normal-hearing listeners, showing mean masker level at threshold as a function of masker–signal interval for on-frequency ͑4000-Hz͒maskers ͑triangles͒ and off-frequency ͑2200-Hz͒ maskers ͑circles͒.
and the correlation is not significant (rϭϪ0.155, nϭ48, p absolute threshold and off-frequency TMC slope at a specific ϭ0.293). Second, the off-frequency TMC slopes for the masker–signal interval and at a specific masker level.
normal-hearing group show a tendency to decrease with in- Second-order polynomials were fit to the off-frequency creasing masker level, and the correlation between level and TMCs for each listener, and the slopes of the functions cal- slope is significant (rϭϪ0.271, nϭ106, pϭ0.005). The culated ͑analytically͒ at a masker–signal interval of 30 ms correlation between level and slope is not significant for the and, separately, at a masker level of 85 dB SPL. A slope hearing-impaired group (rϭϪ0.159, nϭ48, pϭ0.282), al- value was only included when the masker–signal interval though the range of levels for this group is much less than ͑either 30 ms, or the calculated masker–signal interval for an 85-dB SPL masker͒ fell within the range of intervals tested A second analysis investigated the relationship between for that listener. The calculated slopes are shown in the lower FIG. 2. As Fig. 1, except showing TMCs for hearing-impaired listeners.
J. Acoust. Soc. Am., Vol. 115, No. 4, April 2004 Plack et al.: Nonlinearity and hearing loss 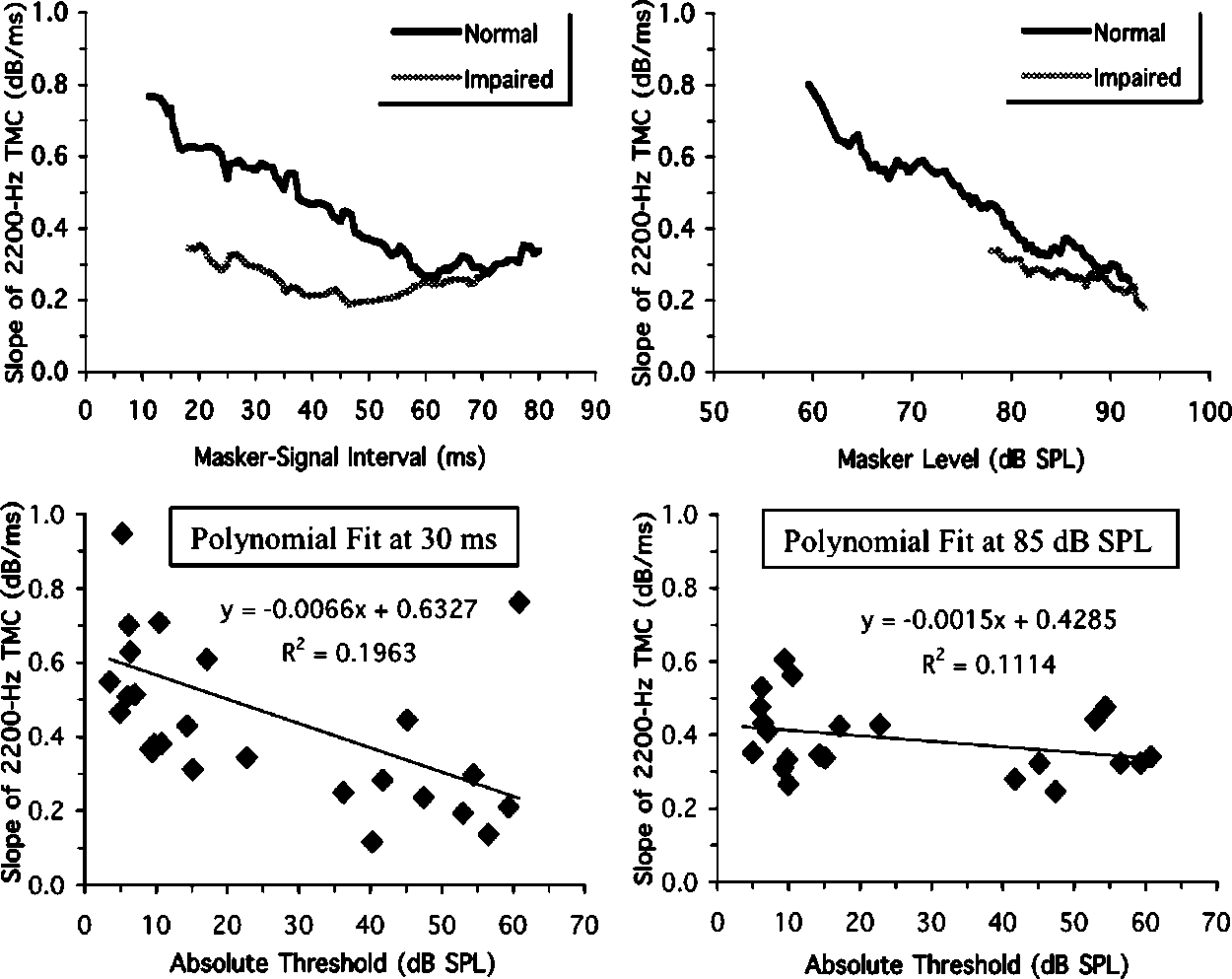 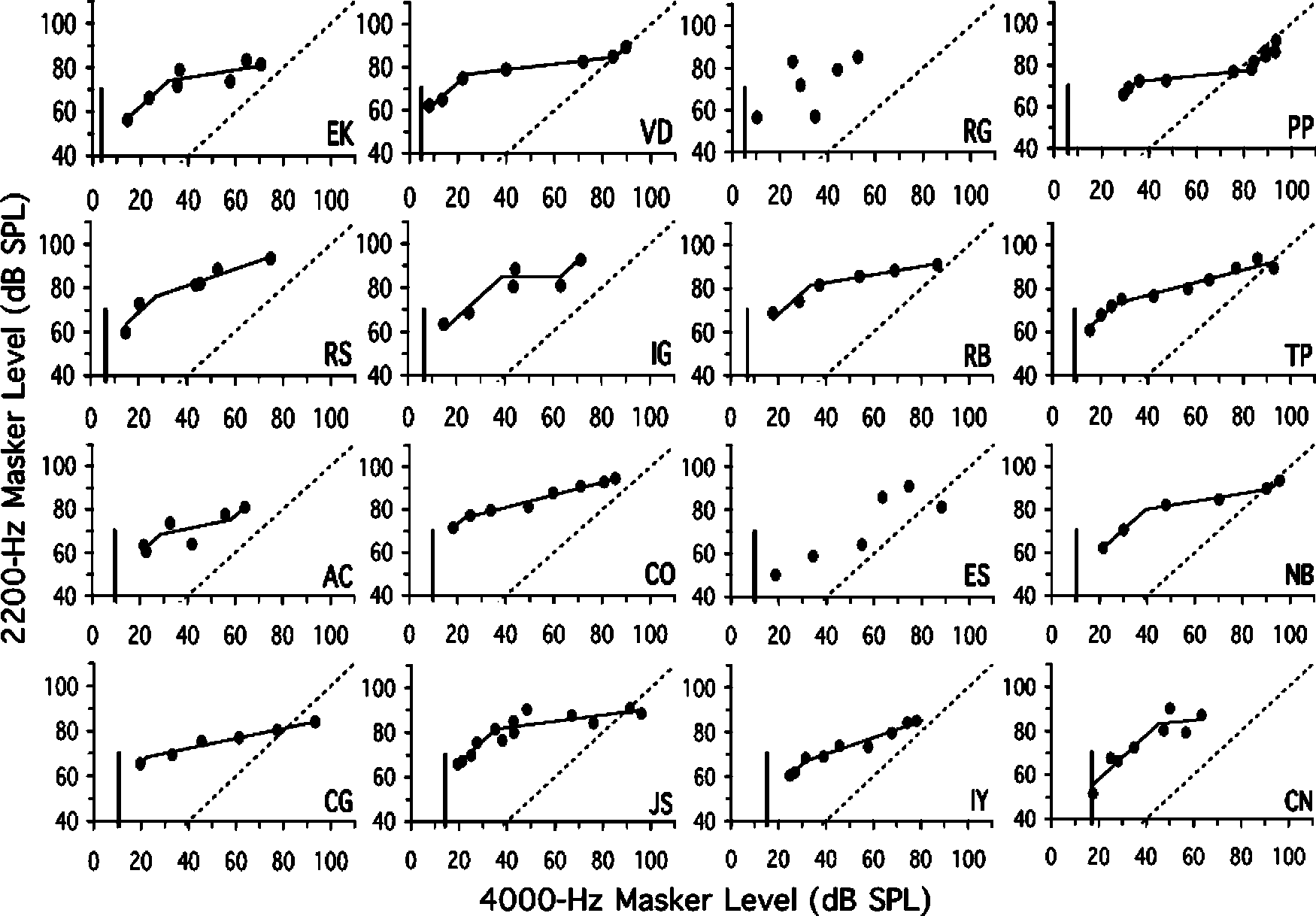 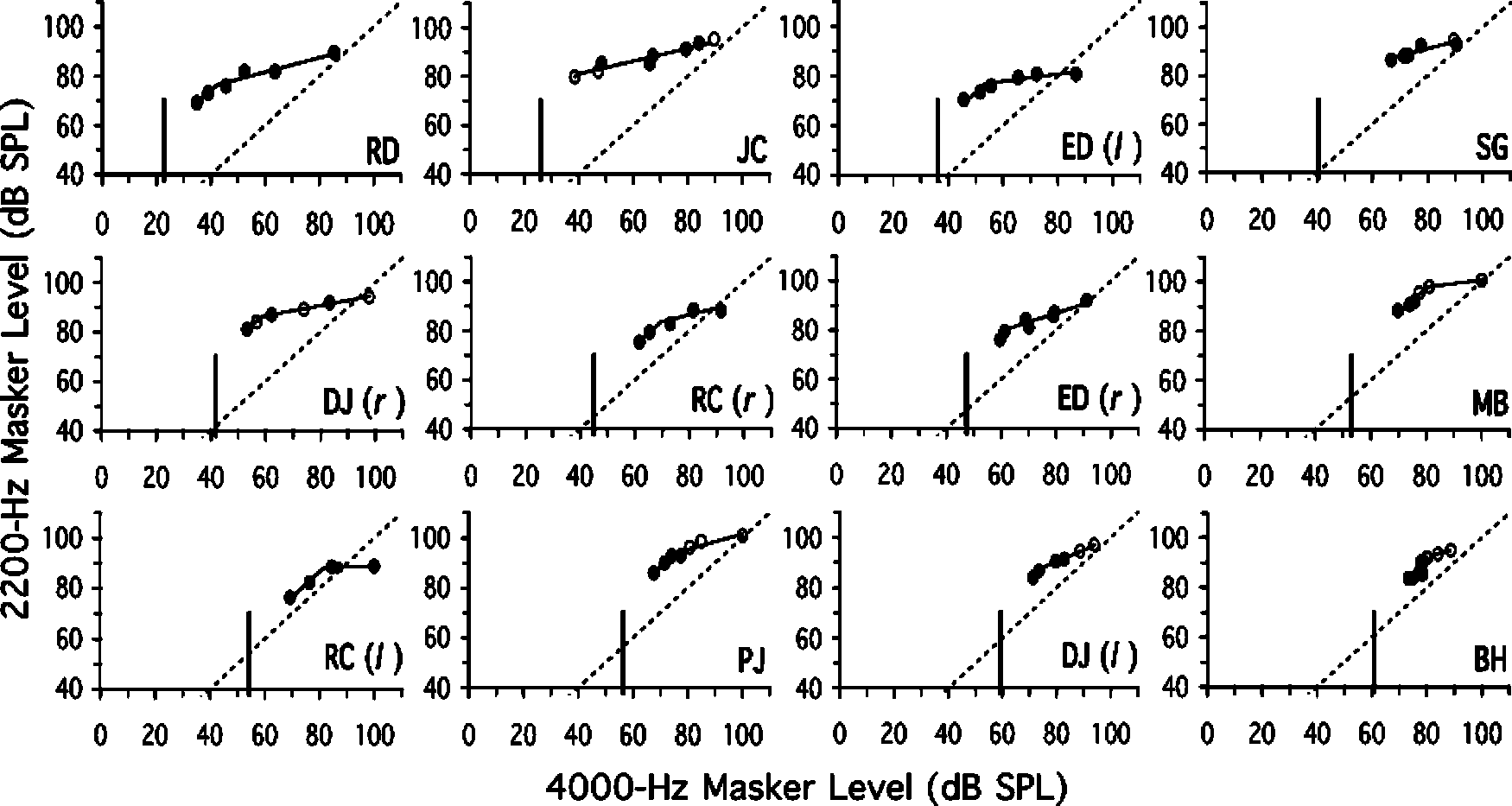 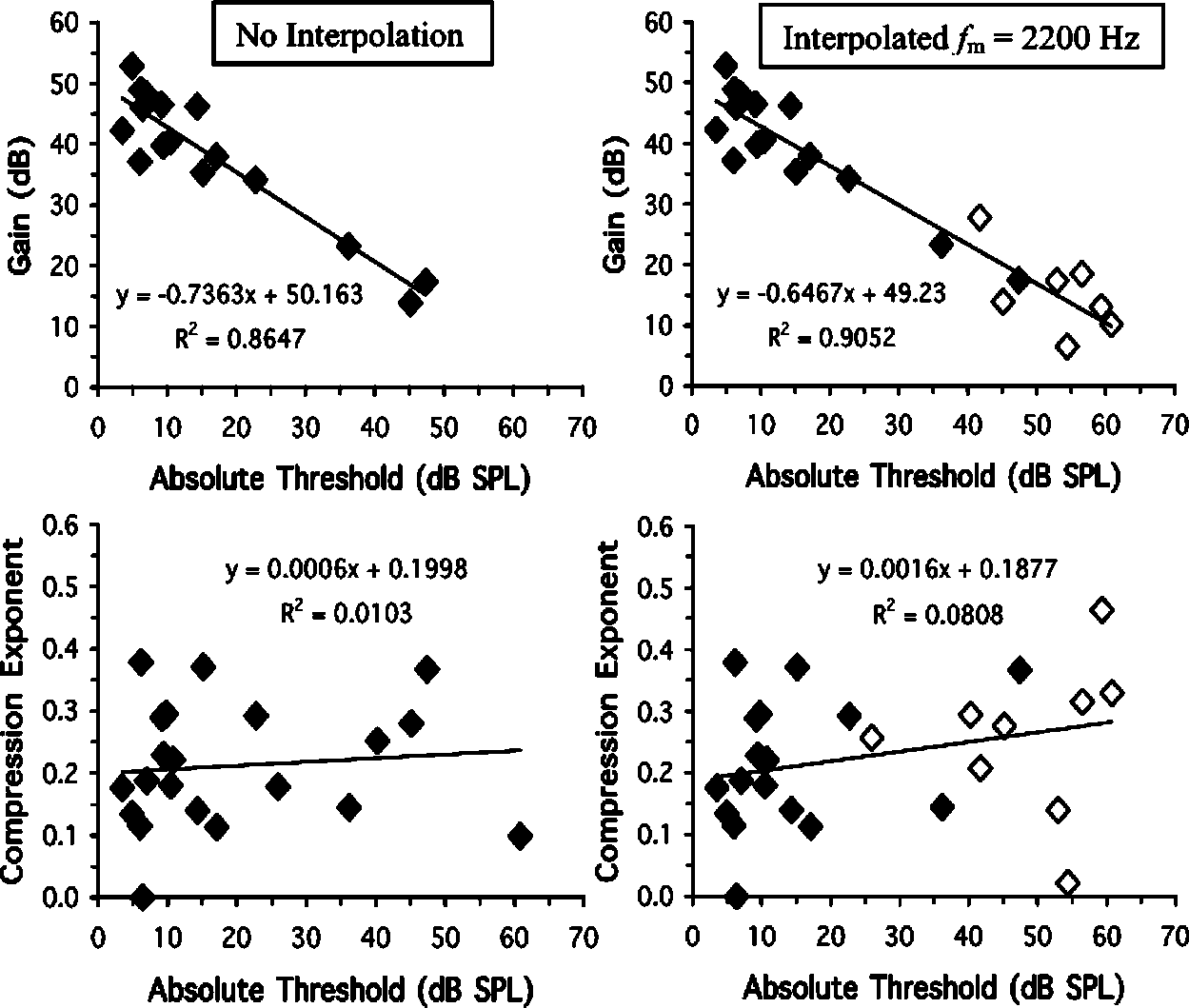 FIG. 6. Scatterplots of maximum gain against signalabsolute threshold ͑upper panels͒, and response-function slope against signal absolute threshold ͑lowerpanels͒, at 4000 Hz. The left-hand panels show the re-sults for response functions generated without interpo-lation. The right-hand panels include the results for re-sponse functions that were generated using interpolatedoff-frequency masker levels ͑indicated by the opensymbols͒. Gain estimates are only included when thelow-level portion of the response function is defined byat least two points ͑see Table I͒.
0.15, 0.29, 0.21, 0.28, and 0.37, respectively, for the interpo- ponent, should all be unaffected by the hearing loss, and lated data͒. The mean compression exponent for the interpo- hence independent of the degree of hearing loss. For an ear lated data is 0.20 for the normal-hearing listeners and 0.26 with purely OHC dysfunction, however, the maximum gain should be strongly related to the absolute threshold. Specifi- There is an issue regarding whether the three-section cally, a plot of gain ͑in dB͒ against absolute threshold ͑in dB͒ straight-line fits provide an accurate characterization of the should be a straight line with a slope of Ϫ1. Turning down response functions. Third-order polynomials have been used the gain by 10 dB should result in an increase in absolute previously to fit response functions ͑Nelson et al., 2001; Plack and Drga, 2003͒. Such fits were attempted on the If the hearing loss experienced by our listeners were present data but gave very inconsistent results, with negative simply a matter of non-frequency-specific attenuation prior slopes in some cases. It was felt that the three-section fits, to the BM, as might result from conductive hearing loss, then although not ideal, do capture the main features of the re- both on- and off-frequency TMCs would increase by the sponse functions for the normal-hearing and hearing- same amount and, consequently, the estimated maximum impaired listeners: The reduction in gain with hearing loss gain would remain unchanged as a function of hearing loss.
͑also reflected in the vertical spacing between the on- and Similarly, pure IHC loss ͑post-BM attenuation͒ should result off-frequency TMCs͒, and the preservation of a shallow in no change in the estimated maximum gain ͑although it is slope in the response function ͑compression͒, even for ears only possible to measure the lower breakpoint on the re- sponse function if it is above absolute threshold͒. These pre-dictions do not seem to describe the present data. The strong IV. DISCUSSION
relation between maximum gain and absolute threshold ͑Fig.
6͒ suggests that the hearing loss in the impaired listeners A. Consequences of inner and outer hair cell
tested here was mainly the result of OHC dysfunction. Off- dysfunction
frequency TMCs were somewhat higher in level for the An elevation in absolute threshold may result from a hearing-impaired compared to the normal-hearing group, but dysfunction of the inner hair cells ͑IHCs͒ or of the OHCs it was the general increase in level for the on-frequency ͑see Moore, 1995͒. IHC dysfunction reduces the efficiency of TMCs relative to the off-frequency TMCs that characterized transduction of BM vibration ͑hence reducing sensitivity͒ but the impaired group, again consistent with OHC damage. In- is not thought to affect the mechanical properties of the BM cluding the interpolated data, the plot of gain against abso- itself ͑Liberman et al., 1986͒. OHC dysfunction affects the lute threshold has a slope of Ϫ0.65, which suggests that most response of the BM, but not the transduction process per se.
of the threshold elevation can be attributed to a reduction in Now, imagine a situation in which a cochlea has damage to gain. The fact that the slope was not Ϫ1 suggests that there the IHCs only. For a given input level, the response proper- may have been some IHC dysfunction among the listeners ties of the BM should be identical to that for a healthy ear.
͑contributing to perhaps 35% of the threshold elevation for According to the measures described earlier, the maximum those ears for which the gain was measurable͒. Indeed, from gain of the active mechanism, the input level at the first the results of other studies examining the relative proportions breakpoint in the response function, and the compression ex- of IHC and OHC hearing loss, it would be surprising if there J. Acoust. Soc. Am., Vol. 115, No. 4, April 2004 Plack et al.: Nonlinearity and hearing loss 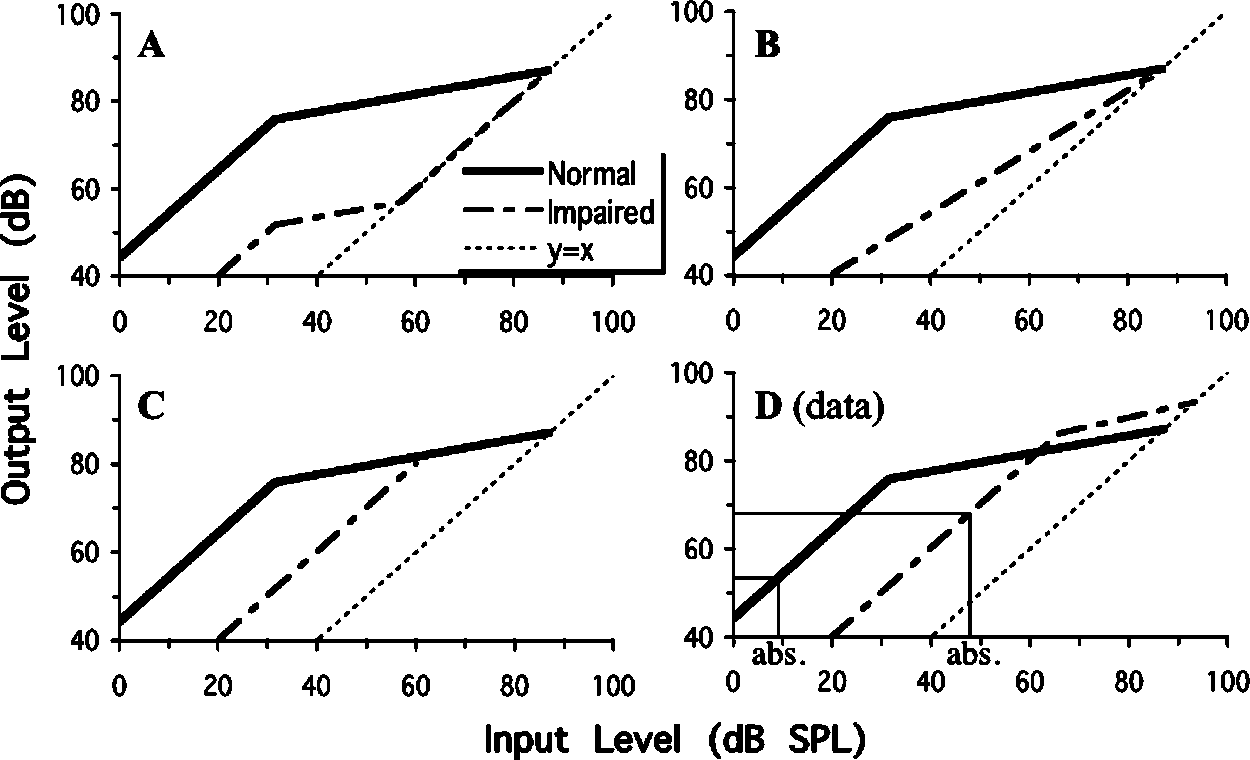 Microsoft word - doctrine of the church.doc

The New Testament Greek term for “church” is ekklesia, which means an assembly of believers, called out by God (1Pet. 2:9-10). The Bible speaks of the church in two distinct ways: the universal church and the local church, with the majority of references to local churches. Grudem simply defines the church as, “the community of all true believers for all time.” The church consists of