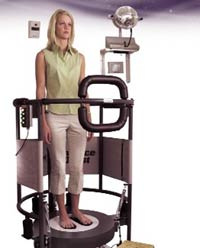 Preventing Falls in the Elderly:
Can It Be Done?
Alan Desmond, Au.D.
Falls are the leading cause of injuries and injury deaths in the elderly population.
Falls leading to hip fracture often result in premature institutionalization and
death, as well as enormous health care costs. Approximately 40% of elderly
American patients with hip fractures die within one year or are placed in long
term care. Clearly, this is a staggering health care problem, which will increase
dramatically as the elderly population increases. No one argues that we, as
health care and medical professionals, should intervene. The questions are
rather, “What to do?” and “Will it actually make a difference?”
Much attention has been paid to this subject in
recent years, and systematic evaluation and
intervention is on the rise in the United States. In
fact, there is currently a bill before the US
Congress titled the “Elder Fall Prevention Act of
2002” with the stated goal “to expand and intensify
programs with respect to research and related
activities concerning elder falls.”
Poor balance and instability in the elderly has been
described as a “geriatric syndrome”, because the
specific cause of these complaints is often not
obvious to the examiner. This is primarily because
poor balance in the elderly is most often multi-
factorial, with no single clinical abnormality
responsible. The risk factors for increased likelihood of falling have been
identified, and intervention for these risk factors has been shown to significantly
reduce the risk of falling. Obviously, intervention can not eliminate the possibility
of an injurious fall, but research indicates that systematic evaluation and
intervention can dramatically reduce the likelihood of a fall.
Tinnetti et al (1994) studied a group of elderly (at least 70 years old) subjects
with known risk factors for falling. By applying interventions aimed at specific risk
factors, the intervention group had significantly fewer falls than the untreated
control group. Specifically, subjects identified with “balance impairment” had the
greatest reduction in falls (over 50% fewer). Close et al (1999) followed a group
of elderly (65 plus) patients that had presented to an emergency room after a fall
injury. After medical and occupational therapy assessment, the intervention
group received care for identified risk factors for falling. At one year follow-up,
the control group had more than twice as many falls than the intervention group.
Jacobson (2002) expanded on these findings by developing an assessment
protocol to identify risk factors in patients that had fallen or had fear of falling.
RISK FACTORS

The following is a list of known factors for increased risk of falling:
1. Vestibular Pathology – an impairment of the vestibular system can cause the
patient to become dizzy or off balance associated with certain movements and
certain visual environments.
2. Polypharmacy –The use of four or more prescription medications or the
initiation of a new medication or dosage have been associated with an increased
risk of falling.
3. Use of tricyclic anti-depressants or benzodiazepines are associated with
increased risk of falls. SSRI anti-depressants may have fewer side effects, but it
is not clear that they result in a reduced risk of falling compared to tricyclics and
benzodiazepines
4. Orthostatic (Postural) Hypotension – Postural pre-syncope associated with
orthostatic hypotension may result in an increased risk for falling when assuming
the upright position
5. Impaired Proprioception (Somatosensation) – The sense of touch is an
important contributor to balance and orientation. The stretch receptors in the
legs, the finger tips, and the soles of the feet, all provide feedback for balance.
6. Cerebellar Dysfunction – The integration of vestibular, visual and
proprioceptive information takes place in the cerebellum. Cerebellar dysfunction
can result in slow or inappropriate reaction to self movement or external visual
stimuli.
7. Hearing Loss -Hearing loss reduces ones orientation and awareness of ones
surroundings. A person with hearing loss is more likely to be startled by
movement in the visual field as they have fewer auditory warning signals.
8. Impaired Vision- Vision plays an important role in balance, and patients with
visual deficits have greater risk for falls. Visual problems associated with
decreased postural stability include: visual acuity less than 20/50, asymmetric
vision impairing binocular vision and depth perception, slow pupillary reaction
causing increased adaptation time when going from a lighted to a dark room and
vice versa, impaired peripheral vision.
9. Depression – Depressed patients may be more internally (therefore less
externally) aware. The use of antidepressants and anxiolytics increase the risk
of falling.
10. Impaired Cognition – Patients with impaired cognition may be less aware of
their surroundings or more likely to engage is risky activities.
11. Impaired Reaction Time – Many fall avoidance strategies are dependent on
reaction time when postural stability is challenged. Slower reaction time may
increase the risk of falls when the patient’s limits of stability are exceeded.

Our program is modeled after that used at Vanderbilt University Medical Center.
We work with Physical Therapists in the region to provide a comprehensive
assessment of known risk factors. A report is then forwarded to the referring
physician with recommendations for intervention. Following a thorough history
interview, the patient undergoes a series of tests of hearing and vestibular
function (Audiogram, ENG, Rotary chair test and Posturography). Evaluation for
orthostatic hypotension and a review of medications is performed. Examination
for strength, sensation and range of motion of the lower extremities is performed.
Screening tests for depression and cognition are completed. The patient’s
lifestyle, goals, and concerns are reviewed.
INTERVENTION

Typically, there is no magic bullet, or single intervention that will make a
significant impact. Treating each identified risk factor has been shown (as noted
above) to reduce the risk of falling. Treating a vestibular disorder may eliminate
episodes of dizziness. Review of medications and possible side effects may
minimize some risk factors. Ongoing physical therapy and balance retraining can
increase mobility and independence. Modifications to the home may reduce the
number of fall hazards.

Sexual Transmitted Infections Many genital and urinary tract infections are spread though close physical contract with an infected person. Unprotected sex is therefore the most common way of passing on the infection. Sexual y transmitted infections (STIs) include the following: CHLAMYDIA Symptoms Genital chlamydial infection in women often causes no symptoms. Some women may have 'n