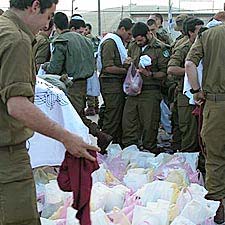 NJ Jewish News on-line | ‘Lone soldiers’ ‘Lone soldiers’ Local women send Purim treats to Israel’s 14th tank brigade Soldiers at the Tel Arad base receive the by Gil Hoffman NJJN Israel Correspondent 03.08.07 JERUSALEM — Israeli reserve soldiers spent Sunday’s Purim holiday in Ramallah quelling Palestinian rioting. But they took a break from the operation to accept the delivery of an important shipment of supplies from their supporters in New Jersey. Instead of guns or ammunition, the shipment contained packages of fresh-baked chocolate chip cookies, brownies, hamantaschen, candy, and wine provided in part by the Women’s Campaign of the Jewish Federation of Central New Jersey. The women sent 69 $18 packages to the soldiers via Gili’s Goodies, an Efrat-based bakery that bundles care packages for Israeli soldiers. “I have no words to describe their emotions when they saw that Jews so far away thought about them and sent them these packages,” said Colonel Ben-Zion Gruber, commander of the of the 14th tank brigade of the Israel Defense Forces. “This proves that in the end we really are one nation.” Gruber’s soldiers were just some of more than 1,000 young men and women in uniform who received packages. This campaign, said federation executive vice president Stanley Stone, “started as a two-goal objective: first to keep in everyone’s mind the Israeli soldiers and let them know that Jews in the Diaspora care. It also provided an opportunity to support an Israeli business.” Stone and David Ehrlich, a New York native who founded Gili’s Goodies with his wife, Gail, helped make a shidduch between the New Jersey group and the soldiers. The soldiers are being trained at the Tel Arad base outside http://www.njjewishnews.com/njjn.com/030807/cjLoneSoldiers.html 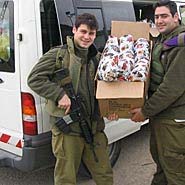 NJ Jewish News on-line | ‘Lone soldiers’ Arad, the Negev development town that is Central New Jersey’s sister community in the Jewish Agency’s Partnership 2000 program. Many of the young men and women stationed at the base are “hayalim bodedim” — “lone soldiers” whose parents do not live in the country — so Ehrlich decided to augment the shipment from Central New Jersey with other donations to reach as many lone soldiers as possible. On a Central New Jersey Women’s Campaign mission two years ago, Ehrlich organized a meeting between soldiers stationed in the Gush Etzion region south of Jerusalem and the women who brought them goodies from both Israel and New Jersey. “It was an emotional meeting for both the women and the soldiers,” Ehrlich recalled. “For me it was sweet in more ways than one. It was Gili’s goodies that made the connection between them.” Ehrlich was busy on Sunday delivering packages donated by American synagogues, schools, Jewish individuals, and one Christian woman from New Hampshire who heard about his company from an ad on the Internet. “I told her, ‘God bless you and thank you for taking care of our land and our soldiers,’” Ehrlich said. Though Purim is Ehrlich’s busiest time, Gili’s Goodies provides care packages all year round for soldiers, elderly people who are homebound, and sick children at Jerusalem’s Shaare Zedek Medical Center. They conducted special drives for soldiers in the summer’s war in Lebanon and for evacuees from the Gaza Strip. The company’s products are sold in supermarkets and stores throughout the country. Gili’s Goodies also provides care packages from American parents to their children studying in Israeli yeshivot and seminaries and from people hosting celebrations in Israel to their guests staying in hotels. “We have become a connection between Israel and American Jews who want to reach out through something sweet,” said Ehrlich, who is originally from Westchester County. “I love the fact that we are making people smile — the people giving and the people receiving. I am in the smile business.” The company can be reached via email and toll-free telephone in the United States at 1-866-721-7292. http://www.njjewishnews.com/njjn.com/030807/cjLoneSoldiers.html