Your selected document
This is the abstract of a study selected by Drug and Alcohol Findings as particularly relevant to improving outcomes from drug or alcohol interventions in the United Kingdom. It was not published by Drug and Alcohol Findings. Unless permission has been granted, we are unable to supply full text. Click on the Title to visit the publisher's or other document supplier's web site. Other links to source documents also in blue. Hover mouse over orange text for explanatory notes. Free reprints may be available from the authors - click Request reprint to send or adapt the pre-prepared e-mail message. The abstract is intended to summarise the findings and views expressed in the study. Below are some comments from Drug and Alcohol Findings.
and enter e-mail address to be alerted to new studies and reviews
Schottenfeld R.S., Chawarski M.C., Mazlan M.Lancet: 2008, 371, p. 2192–2200.
This unique randomised trial tested what would happen if detoxified opiate addicts were then maintained on a substitute drug, on an opiate-blocking medication, or simply counselled. The results led to the introduction of methadone prescribing programmes in Abstract As a follow-on treatment after opiate detoxification, this study compared the
efficacy of the opiate-blocking medication naltrexone, the opiate substitute buprenorphine, or no treatment other than the drug counselling all patients received. In Malaysia at the time naltrexone was the main long-term pharmacotherapy and maintenance substitute prescribing was not permitted.
Between July 2003 and May 2005, 215 people contacted the study of whom 143 heroin in the study's inpatient clinic. Most of the remaining contacts did not complete the study's initial assessments; just 12 were excluded due to 126 completed detoxification and started 24 weeks of weekly individual and group drug counselling in the study's outpatient research clinic. For randomly selected patients, counselling was buprenorphine, or placebos. In the first week the medications were given daily, then multiple doses were given on Mondays, Wednesdays and Fridays. All the doses were consumed under supervision at the clinic and all the patients consumed similar tablets and capsules, either active or placebos depending on their assignment. Nevertheless, most on the active medications correctly identified what they were taking, though most on placebos did not. Typically the patients were poorly educated single men with a history of imprisonment who had been using heroin for on average 15 years and had used near-daily in the previous month.
Outcomes were assessed mainly by urine tests three times a week while patients were assumption being made that the few tests missed by http://findings.org.uk/count/downloads/download.php?file=Schottenfeld_RS_2.txt (1 of 4) [17/07/09 13:38:54] 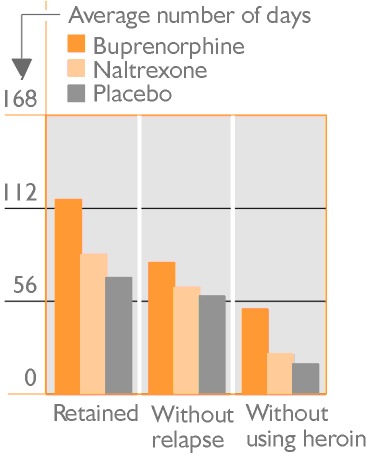 retained patients would have been positive for heroin, and that patients who dropped out of treatment had resumed heroin use. When it became apparent that buprenorphine was clearly the best option, the study was terminated early after 103 patients had completed Supplementing counselling with naltrexone slightly improved treatment retention and heroin use outcomes, but not to a statistically significant degree according to the study's In contrast, were clearly and universally superior for the buprenorphine patients, significantly better than placebo, and generally also significantly better than naltrexone. For example, of the 24 weeks patients could have stayed in treatment, on buprenorphine they stayed on average for 17 weeks, naltrexone 12, and placebo 10 chart. Corresponding figures for retention without a positive/missed test for heroin use were 7, just over 3, and just under 3 weeks. For retention without to sustained heroin use, the figures were 11, 9, and just under 6 weeks.
For the authors their findings showed the efficacy of maintenance treatment with buprenorphine in sustaining abstinence, delaying time to resumption of heroin use and relapse, and retaining patients in treatment, lending support to the widespread dissemination of maintenance treatment with buprenorphine as an effective public health Uniquely the study answered the question: What would happen if continuing care for patients who completed detoxification consisted of low intensity counselling only or with attempts to sustain abstinence using naltrexone, versus effectively accepting that many will relapse and instead prescribing a substitute drug? When these were the only options available, the answer seemed to be that naltrexone offers no substantial advantages, but that makes a big difference to how long and how many patients are able to live without regular resort to illegal opiates. Without this, for most rapid relapse is the norm even after they have been able to complete detoxification; opiate blocking medication does little to improve the situation.
Though this is the verdict from among the range of options on offer in the study, long- acting forms of naltrexone which last weeks or months might have tipped the balance in favour of abstinence-based therapy, and seamless entry in to (to the patient) acceptable forms of residential rehabilitation or intensive day care might have raised outcomes to the point where the choice of medication was less decisive. In both cases, the caveat is that compared to substitute prescribing, fewer patients are prepared to accept or can access these options, and in the case of residential rehabilitation, the are likely to be considerably greater.
The main issue with the study from a UK perspective is its applicability to a country where these are not the only options available, and where even if they were, patients would be expected to be allocated to them on an individual basis in the light of what http://findings.org.uk/count/downloads/download.php?file=Schottenfeld_RS_2.txt (2 of 4) [17/07/09 13:38:54] seems best for that individual. However, there are parallels. As in the featured study, in the UK (and elsewhere) failure to complete detoxification or post-detoxification relapse are the norm, long-acting naltrexone formulations have yet to be licensed and made widely available, and residential rehabilitation remains in short supply. The relevance of substitute prescribing is de-emphasised in favour of abstinence-based approaches, especially if the need for economies forces these to take the form of naltrexone or counselling rather than intensive, extensive and expensive psychosocial rehabilitation.
of oral naltrexone as a means of providing or reinforcing that support, and the more widespread applicability and more securely established effectiveness of substitute prescribing using methadone or buprenorphine. It also provides an argument for maintenance prescribing to be made rapidly available for the many patients unable to avoid a return to regular opiate use after detoxification.
The implications of the study are supported by other studies of , , though no other study has within itself compared on the study put it, this wider research base indicates that "The preferred oral pharmacological treatment for opioid dependence should be agonist maintenance with either methadone or buprenorphine." This verdict carefully limited itself to "pharmacological" treatments and to medications, leaving out more intensive or improved psychosocial approaches or long-acting implanted or injected In Australia, where polarised opinions favoured substitute prescribing or rejected this in favour of naltrexone, the federal parliament reacted by conducting a of their respective advantages in the Australian context. The conclusion was that both had their place, but that place was much greater for substitute prescribing. Oral naltrexone was seen as a niche option for the minority of opioid-dependent individuals capable of remaining compliant with the treatment, but for most it had been consistently been linked with high rates of non-compliance, a greater risk of death and reduced likelihood of long-term success. In contrast, methadone and other opioid substitution treatments were seen as widely applicable treatments acknowledged as effective in reducing opioid dependence and associated health and social problems.
The featured study seems to support this conclusion, but perhaps not as strongly as it might have done. On one key measure – retention without relapse to sustained heroin use – buprenorphine's advantage over naltrexone was small (two weeks) and not statistically significant, possible an artefact of the way Despite its advantages, half the patients on buprenorphine stayed in treatment for six months, less than in other studies possibly due to insufficiently supportive psychosocial was at the lower end of what is considered effective. It also seems likely that buprenorphine's advantage would have been greater had patients not been required to complete detoxification in advance, presumably weeding out those less able or willing to attain abstinence from opiates. On the other hand, the naltrexone patients might have been disadvantaged by the dosing schedule. are known to be able to bridge alternate-day dosing schedules, but in studies naltrexone is normally taken daily, providing a daily reminder to http://findings.org.uk/count/downloads/download.php?file=Schottenfeld_RS_2.txt (3 of 4) [17/07/09 13:38:54]

the patient that any heroin they try will be more or less wasted. Dosing every two or three days left gaps during which the patients might have been tempted to try heroin. However, this schedule probably reflects how both drugs are commonly prescribed in Thanks for their comments on this entry in draft to Brian Kidd of Tayside Drug Problems Service and University of Dundee Medical School, and John Witton of the in London. Commentators bear no responsibility for the text including the interpretations and any remaining errors. Top 10 most closely related documents on this site. For more try a
http://findings.org.uk/count/downloads/download.php?file=Schottenfeld_RS_2.txt (4 of 4) [17/07/09 13:38:54]

Editorial Subjects—In This Issue and in Previous Issues affirms our intuition that (a) patients can discern among specificmeals or rosiglitazone (Avandia) 4 mg twice daily.17 The meansensory attributes of intranasal steroid products, (b) someA1c values at baseline were 9.5% in the INH group versus 9.4%attributes have higher economic value in their avoidance for the rosiglitazone group. Af