The journal of dermatology vol.32 no.12

The Journal of DermatologyVol. 32: 972–975, 2005 A Case of Lichenoid Drug Eruption Associated Emiliano Antiga, Lucilla Melani, Carla Cardinali, Barbara Giomi, Marzia Caproni, Stefano Francalanci And Paolo Fabbri Abstract
A 53-year-old man developed lichenoid lesions on the upper chest, posterior surfaces of the trunk, and abdominal region about three months before his first visit. Physical exami-nation and laboratory findings were normal; histopathology showed vacuolar degenera-tion of basal keratinocytes in association with a dense lympho-histioid infiltrate arrangedin a lichenoid pattern with a few melanophages and eosinophils. The fact that our patienthad been irregularly taking sildenafil citratus (Viagra®) led to the hypothesis of alichenoid drug-induced eruption. Our hypothesis was confirmed by clinical resolutionthree weeks after discontinuation of sildenafil citratus; moreover, the patient avoided thedrug for about four months, and the eruption didn’t reappear. Subsequently, we per-formed a challenge test with the drug, and the patient developed similar lichenoid lesions.
Lichenoid eruptions are rather common dermatoses that can be induced by a great num-ber of environmental agents and are clinically but not pathogenetically well defined. Wereport the present case because, despite the great number of drugs that can be implicatedin the development of lichenoid eruptions, the association of such dermatoses and silde-nafil citratus had been described only once previously in the literature until now. Furthe-more, we wish to remark on the significance of a detailed anamnestic history to make thecorrect differential diagnosis between lichenoid drug-induced eruptions and lichenplanus. This has a great clinical importance because simple discontinuation or substitu-tion of the drug causes lichenoid drug-induced eruption resolution.
lichenoid drug-induced eruption; sildenafil citratus and morphologically very similar, but not Introduction
identical, to LP. The etiology of this noso- graphic entity has been associated with a va- entity consisting of an eruption of viola- ceous, scaling, angular papules characteris-tically found on the flexor surfaces, mucous Case Report
membranes, and genitalia, either as isolated We report the case of a 53-year-old man who lesions or in aggregate patterns; ungueal or was first referred to our Dermatological Unit in hair involvement is quite common (1). The February of 2003, complaining of lichenoid le- term “lichenoid eruption” is used to indi- sions that had developed about three months cate a cutaneous reaction that is clinically previously on the upper chest, posterior surfacesof the trunk, and abdominal region (Fig. 1).
Received September 21, 2004; accepted for publi- The lesions consisted of erythematous and in- filtrated papules ranging from one half to two II Department of Dermatological Sciences, Univer- centimeters in diameter. Some of them had a polycyclic-annular appearance with the central Reprint requests to: Marzia Caproni, II Depart- area more reddish and infiltrated, while the ment of Dermatological Sciences, Via degli Alfani 37,50121, Florence, Italy.
outer erythematous ring was not well-defined. 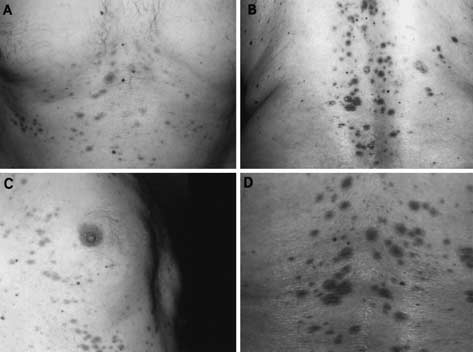 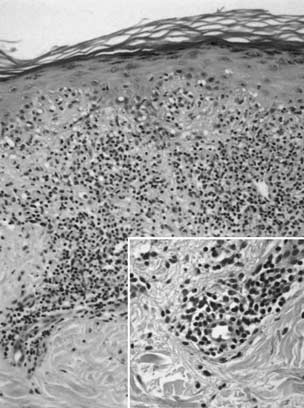 Fig. 1. Lichenoid lesions of the chest (A), of the dorsal surface (B) and the lateral surface of the trunk (C), with a detail of the lesions (D) The patient did not complain of pruritus orother associated symptoms. In addition, uponexamination, he didn’t show any oral, ungueal,or scalp involvement. The patient had neverbeen affected previously by similar cutaneous le-sions. Blood examination showed no any alter-ations, and his eosinophil count was normal.
Moreover, HBV and HCV serological markerswere negative.
Histological examination of the lesional skin of the chest documented acanthosis of the epider-mis, with vacuolar degeneration of basal ker-atinocytes and focal parakeratosis, in associationwith a dense lympho-histioid infiltrate disposed ina lichenoid pattern. A few melanophages andeosinophils were detectable in the dermis (Fig. 2).
with the diagnosis of lichen planus, the consider- ▲ Fig. 2. Acanthosis and vacuolar degeneration of basal keratinocytes, in association with a denselympho-histioid infiltrate disposed in a lichenoidpattern. In the box, detail of eosinophils withinthe dermal infiltrate.
pothesis of lichenoid drug-induced eruption was confirmed by clinical resolution three weeksafter discontinuation of sildenafil citratus; more- over the patient avoided the drug for about four months and the eruption did not reappear. Sub- sequently, we performed a challenge test with the drug, and the patient developed similar lichenoid lesions nine days later. The new erup- tion disappeared in about three weeks. After the challenge test, we proposed patch tests, but the Discussion
ation that our patient had been irregularly tak- dermatoses that can be induced by a great ing sildenafil citratus (Viagra®) led to the hypoth- esis of a possible lichenoid drug-induced erup- clinically but not pathogenetically well de- tion. The drug had been started about two or fined, unlike LP, which is characterized by a three months before the first clinical manifesta- persistent activation of CD8+ autocytotoxic tions and was taken for the last time four days be- T-lymphocytes against epidermal cells (2).
fore our clinical examination. The patient did In previous literature, it has been asserted not mention to variations in his clinical course that drugs can play a pathogenetic role in during the three months before our observation; the development of such lesions; they prob- he had used the drug about once or twice a week, and his cutaneous manifestations were stable, munogenetic antigens by linking to epider- without exacerbation, when the drug was taken.
Moreover, it seems worth remarking that the patient had not initiated any other drug in the eruptions is already long and continues to in- last six-month period, and there were no indica- crease steadily. It often occurs with demeclo- tions of cardio-vascular or dismetabolic disor- cycline (3), quinine (4), acetylsalicylic acid ders in the clinical history. Our diagnostic hy- (5), thiazide diuretics, streptomycin, isoni- Differences among lichen planus and lichenoid eruptions azide, levopromazine, amiphenazole, methyl- mittently instead of continuously, as in most dopa, and pyrimetamine. Relatively more re- cent additions include reactions to β-block- ing agents, enalapril (6), captopril, carba- significance of a detailed anamnestic history mazepine, ethambutol, pravastatin (7), sim- to make the correct differential diagnosis vastatin, and many others (Table 1) (8, 9).
and lichen planus, and to correctly identify severe, and resolution can be slow (about the etiological agent. This has great impor- 2–3 months) after withdrawal of the impli- tance not only epidemiologically, but overall clinically, because simple discontinuation or substitution of the drug induces resolution.
lichenoid eruptions don’t often involve thedor hands’ dorsal region, the genitals and References
1) Arndt KA: Lichen planus, in Fitzpatrick TB, fected. Also the histological pattern could be Eisen AZ, Wolff K, Freedberg IM, Austen KF(eds): Dermatology in General Medicine, McGraw- helpful, because of the presence of focal parakeratosis (10), of eosinophils within the 2) Sughman PB, Satterwhite K, Biagy H: Autocyto- dermal infiltrate, and the frequent absence toxic T-cells clones in lichen planus, Br J Derma- of epidermal hypergranulosis, which is a very tol, 142: 449–456, 2000.
3) Epstein J, Maibach HI, Sams M: Photosensitive these histopathological features can be con- lichenoid eruption associated with demeclocy-
cline, Arch Dermatol, 109: 97–98, 1974.
sidered as a significant criterium allowing a 4) Meyrick Thomas RH, Munro DD: Lichen Planus in photosensitive distribution due to quinine, Clin Exp Dermatol, 11: 97–101, 1986.
nevertheless, their observation can give a 5) Ruiz VR, Blasco MJ, Mendoza GF, Martin S MC, Naranjo SR: Generalized lichen planus-likeeruption due to acetylsalicylic acid, J Eur Acad In our patient, suspicion of a LP-like erup- Dermatol Venereol, 17: 470–472, 2003.
tion arose from the clinical distribution and 6) Ruiz VR, Blasco MJ, Linares SJ, Serrano OS: histological signs (parakeratosis, eosinophils; Lichen planus-like eruption due to enalapril, J absence of hypergranulosis) of the lesions, Eur Acad Dermatol Venereol, 17: 612–614, 2003.
and above all from the anamnestic detection 7) Keough GC, Richardson TT, Grabski WJ: Pravas- of sildenafil citratus intake and the positivity tatin-induced lichenoid drug eruption, Cutis, 61:
98–100, 1998.
8) Black MM: Lichen planus and lichenoid disor- Sildenafil citratus is a phosphodiesterase ders, in Rook A, Wilkinson DS, Ebling FJC (eds): type 5 inhibitor indicated for erectile dys- Textbook of Dermatology, Blackwell Science, Lon- function. It enhances the effect of nitrous oxide on penile erection by preventing the 9) Braun-Falco O, Plewig G, Wolff HH, Burgdorf WHC: Dermatology, Springer-Verlag, Berlin, Hei- a cyclic nucleotide which produces smooth 10) Van den Haute V, Antoine JL, Lachapelle JM: Histopathological discriminant criteria between lichenoid drug eruption and idiopathic lichen spite the great number of drugs that can be planus: Retrospective study on selected samples, implicated in the development of lichenoid Dermatologica, 179: 10–13, 1989.
11) Cottoni F, Montesu MA: Lichen planus, in Gian- netti A (ed): Trattato di Dermatologia, Piccin, matoses and sildenafil citratus had been de- scribed only once previously in the litera- 12) Fabbri P: Lichen planus, in Fabbri P (ed): Im- ture until now (13). Interestingly, like the munodermatologia, ISED, Brescia, 2002, p 220.
one previously described, our case is unusu- 13) Goldman BD: Lichenoid drug reaction due to sildenafil, Cutis, 65: 282–283, 2000.
al because the medication was taken inter-